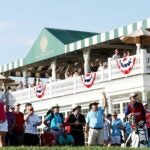 Trump National Bedminster, following a vote on Sunday by the PGA of America Board of Directors, will no longer serve as host for the 2022 PGA Championship.

PGA of America president Jim Richerson said in a video that the board had exercised its right to “terminate the contract to hold the 2022 PGA Championship at Trump Bedminster.”

In doing so, the organization became the latest to dissociate itself from President Donald Trump in the days following riots at the Capitol, which came as Congress was certifying votes from the 2020 presidential election.

Richerson said the decision came with the 105-year-old PGA of America’s future in mind.

“It has become clear that conducting the PGA Championship at Trump Bedminster would be detrimental to the PGA of America brand and would put at risk the PGA’s ability to deliver our many programs and sustain the longevity of our mission,” he said. “Our board has thus made the decision to exercise our right to terminate the contract to hold the 2022 PGA Championship at Trump Bedminster. It was a decision made to ensure the PGA of America and the PGA professionals can continue to lead and grow our game for decades to come.”

The PGA had originally agreed to host the tournament at Trump Bedminster in 2014, before the president’s campaign had begun in earnest. In 2015, the organization canceled the PGA Grand Slam of Golf slated for Trump National Los Angeles.

Bedminster last served as major championship host for the 2017 U.S. Women’s Open, which President Trump attended in person. Following the PGA’s vote, there are no major championships currently scheduled for Trump properties.

“We find ourselves in a political situation not of our making,” Seth Waugh, the PGA CEO, told the Associated Press. “We’re fiduciaries for our members, for the game, for our mission and for our brand. And how do we best protect that? Our feeling was given the tragic events of Wednesday that we could no longer hold it at Bedminster. The damage could have been irreparable. The only real course of action was to leave.”

Golf Channel aired the response from the Trump Organization, which reads as follows:

“We have had a beautiful partnership with the PGA of America and are incredibly disappointed with their decision. This is a breach of a binding contract and they have no right to terminate the agreement. As an organization we have invested many many millions of dollars in the 2022 PGA Championship at Trump National Golf Club, Bedminster. We will continue to promote the game of golf on every level and remain focused on operating the finest golf courses anywhere in the world.”

Potential replacement venues for the tournament, according to GOLF’s Alan Shipnuck, include Southern Hills in Oklahoma, Liberty National in New Jersey, and Shoal Creek in Alabama.