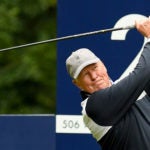 In early February, the United States Golf Association and the R&A released the Distance Insights Report. It’s a summary of what the governing bodies believe to be golf’s distance problem.

Over the past year, culminating in mid-June, Bryson DeChambeau released his muscle. Distance isn’t a problem.

R&A chief executive Martin Slumbers told Sportsmail that he is “fascinated by” DeChambeau. He can not be changed.

“My view is very much that golf is a game of skill,” he told Sportsmail. “It’s important to have a balance of skill and technology.”

The Distance Insights Report suggested that increased hitting distances are hurting the game, and while it did not give specific solutions, it did suggest such things as the potential for new conformance tests for clubs and balls, and a local rule that would allow courses to require limited-flight equipment. The USGA and the R&A postponed furthering the report due to the coronavirus pandemic.

The report will continue, Slumbers told Sportsmail. He said “the relationship between ball and club” is important.

“It is too simple just to say change the ball,” he told Sportsmail. “Way too simple. You can do things with the ball. But it’s the relationship between ball and club which is most important, to me.

“The fundamental change in the golf ball since 1999-2000, with the introduction of ProV1 technology, is the ball spins less. And drivers have been designed so it spins even less, which makes it go further.”

Over the past year, DeChambeau has added distance through muscle gain.

Since last October, DeChambeau has said that he has put on around 40 pounds of weight, and it became noticeable when the PGA Tour returned in mid-June after its three-month hiatus due to the coronavirus. Noticeable, too, were his distance and results – he has not finished worse than tied for eighth in the past month, including a win at the Rocket Mortgage Classic two weeks ago, and he leads the Tour in driving distance.

Slumbers has been impressed.

“I’m not sure I can remember another sportsman, in any sport, so fundamentally changing their physical shape,” he told Sportsmail. “I can’t think of anyone. I’m thinking of some boxers because I love boxing.

“But what is extraordinary is that Bryson isn’t the first one to put on muscle in golf. How he’s able to control the ball, with that extra power, is extraordinary. All credit to him, he’s a true athlete.”