‘I would have done exactly the same thing’: Pros weigh in on Dustin Johnson-Kevin Na dust-up 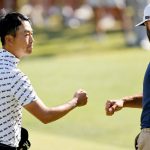 After Dustin Johnson mistakenly picked up a short putt in his match against Kevin Na, players voiced their opinions on how to properly concede putts.

The WGC-Dell Match Play is a unique week for the PGA Tour. Departing from the typical 72-hole stroke-play format, the event at Austin Country Club provides a departure from the norm as 64 players compete in the only match-play event on Tour.

With the rarely used format comes scenes that aren’t typical in any of the other weeks of the season on Tour. Some players never see the closing holes with their matches being closed out so early, and the field dwindles as the week wears on. The rules are different, too.

Match play gives players the option to concede strokes, holes and even matches. But those concessions can at times turn dramatic. Take the Sergio Garcia-Matt Kuchar conundrum from 2019 for example. Garcia missed a short putt and then carelessly backhanded his ball which horseshoed around the hole. The only issue was Kuchar didn’t concede the putt before Garcia backhanded it. According to the rules of golf, Kuchar won the hole.

This year’s edition of the event saw similar drama in the Kevin Na vs. Dustin Johnson match late Friday afternoon. Johnson mistakenly pocketed his ball when it was mere inches from the cup before Na had the chance to verbally concede the putt. Na did not claim the hole for himself, but he did make clear to the World No. 1 that he shouldn’t assume anything in match play.

“I know it’s this close,” Na said as he demonstrated the length of the putt. “But you still have to wait.”

It’s not often you see one golfer lecturing another in the middle of a tournament, but hey, match play is a unique beast.

The scene was a much-discussed topic on the last day of pool play in Austin, and reporters asked several players their personal protocol when it comes to concessions.

“I think it’s important for the guy to actually say, ‘Hey, it’s good, pick it up,'” Erik van Rooyen said. “I’m not going to assume anything.”

The assumptions are exactly what got Johnson and Garcia in a bit of trouble. Even though players of their caliber are nearly automatic on short putts, the rules of golf are stringent and quite black and white on the issue.

Rule 3.2b plainly outlines the rules of concession. It does not provide much room for nuance. “You may concede your opponent’s next stroke, a hole or the match,” the rule states, “But a concession is only made when it is clearly communicated.” The last portion is crucial. The concession cannot leave any room for doubt. It must be made in a clear manner.

“I need to hear it,” said Scottie Scheffler, who is competing in his first Dell Match Play. “A lot of times I’ll ask for confirmation … I think a lot of times in match play you can make that assumption, but I think it’s always safe to kind of wait and to hear it.”

Fellow Texan Jordan Spieth had similar thoughts on the matter.

“I’m very clear in what I say, and then I don’t pick anything up unless I look over and I’m like, ‘Are you sure?'” he said. “It’s no reason to kind of have an issue or losing a hole because of that.”

Ultimately, Na didn’t claim the hole over Johnson, but his act did turn some heads. While opinions on the lecture were split on social media, players aligned largely with Na.

“Even if it’s something that I was going to give to them, I would just tell them the same thing,” Jon Rahm said. “I would have done exactly the same thing Kevin Na [did].”