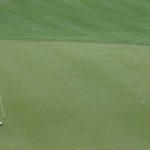 Patrick Cantlay looks back at the 13th hole on Wednesday.

Jordan Spieth swung hard and hit driver on the short par-4 13th hole at Austin Country Club on Wednesday — and his ball eventually found its way to Patrick Cantlay two holes ahead of him.

Spieth’s drive landed through the fairway and hit off a cart path, which vaulted it ahead to the nearby 15th green. It actually passed just a few feet from Cantlay, who struck his birdie putt as Spieth’s ball was still rolling next to him. Just as Cantlay missed his putt, he looked up at the ball running through the green.

“I think it landed on the cart path and then just shot over,” said Spieth, who took a free drop and made par. “There’s stairs coming down and my ball came down on the left side of the stairs. And to that back-left pin it’s a no-brainer, you hit driver up there and you have a 50- to 60-yard pitch right up the green, and that wedge shot is just so difficult to the back-left pin. No matter where it goes there, you have 80 yards of room, as long as it doesn’t toe-drop in the water, any other position is fine. When it hit the cart path it just makes it look crazier, but in reality you’re going to drop in the same place, no matter where you hit it. I don’t see that strategy changing for me. It was just kind of annoying to have to walk an extra 50 yards to get my ball.”

“It just kind of came out of the corner of my eye as I was taking it back, and I didn’t stop,” Cantlay said. “I hit a good putt, actually, and I thought it would have broke. But that’s golf on Tour; weird stuff happens every day.”

Cantlay told reporters he didn’t know who hit it. They told him it was Spieth.

Spieth beat Matt Fitzpatrick 3 and 1 in their opening match of the WGC-Dell Technologies Match Play, and Cantlay beat Brian Harman 1 up. You can find all of the Thursday matchups here.