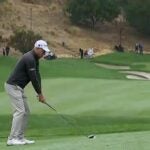 Adam Long gets ready to hit his second shot into the 13th hole.

Understandably, Adam Long was excited for this tee time. He got the notification on Saturday night and immediately took it to Twitter.

“Not sure exactly how many combined wins in this group but it’s a lot, plus one,” he wrote.

Long, whose lone PGA Tour victory came at the 2019 Desert Classic, had what’s called a marquee grouping on Sunday at the Zozo Championship at Sherwood Country Club in Thousand Oaks, Calif. The 33-year-old Long was grouped with Tiger Woods and Phil Mickelson for the final round.

The group went off the 10th tee at 2:28 p.m. ET, but they were hardly in contention to win this week. The Zozo is a no-cut event, and Woods and Mickelson started the final day 16 shots behind Justin Thomas, with Long 18 back. Long, playing in front of two of golf’s biggest stars, got the best of Woods and Mickelson on Sunday — but he also hit one of the most unfortunate shots of the day.

Hitting a fairway wood for his second shot into the par-5 13th green — his fourth hole of the day — Long took a mighty cut from 270 yards out and, well, we’ll let the PGA Tour Live broadcast team take it from here.

“Oh, he topped it,” the announcer said.

The only difference between a top from a pro and a top from some hacker, though, is that the pros at least have good tops — and can rebound. This one from Long still went 127 yards, and from there he stuck it to inside 11 feet and made the birdie putt. Now that’s how you respond after a bad shot.

Long turned in a pretty solid round, firing a three-under 69. That also won the head-to-head battle over Woods (74) and Mickelson (78). Now that’s a good day at the office (top or no top).