This pro had a pretty bizarre 24 hours at the U.S. Open 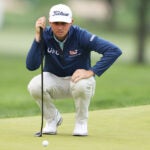 J.T. Poston lines up a putt on the 1st hole at Winged Foot Golf Club on Thursday.

J.T. Poston hit a rock into his eye.

He hit a shot backward.

He hit a shot off a tree branch that then landed pin high.

He played two rounds at the U.S. Open at Winged Foot. He didn’t make the cut.

Poston had himself a day, too.

He was a part of the second group out during the first round, shot a one-over 71 and went to the range in the early afternoon. He hit some balls. His 9-iron hit a rock, and it kicked up and hit him in the left eye. According to Golf Digest, Poston went to the medical tent and had his eye cleaned up, and he was later told by a specialist he had scratched his cornea.

“Immediately my vision was blurred and still hasn’t gotten back to 100%. Overall nothing permanent just needs time to heal,” Poston wrote on Twitter.

On Thursday night, he posted a selfie on Twitter that showed his left eye — and a good part of his head — completely bandaged. He said his vision was still blurred but had improved throughout the day. He decided to play Friday afternoon.

“Unfortunate the timing of everything fortunate to at least have a chance to play today after lookin like this yesterday afternoon,” Poston wrote under the selfie.

With essentially one eye, he shot a 12-over 82 during the second round.

He also hit one of his shots with one arm and backward.

On the 488-yard, par-4 16th, Poston hit his second shot up against a tree to the left of the green. He had 31 yards to the hole. Poston’s right-handed swing was blocked. His backward swing wasn’t. He turned both himself and his club around, and holding the iron with just his right arm, he chipped his ball to within about 25 feet. He would miss the par putt.

“This is one you don’t practice much. But you should practice the crazy ones,” analyst Peter Jacobsen said on the NBC broadcast. “That’s pretty good.”

He hit another one of his shots off a tree — and onto a green.

On the 148-yard, par-3 7th (Poston started on the back nine), Poston hit his tee shot left. Very left. He lowered his arms in disgust, turned to his right and didn’t look.

His ball hit a tree and dropped 15 feet from the hole.

“That might be the worst shot he ever hit with a 9-iron and he has 10 or 12 feet for birdie,” analyst Paul Azinger said on the broadcast. “What a break.”

“That is just dead over there, caroms to the right and far enough to get himself right on the edge,” play-by-play announcer Dan Hicks said.

Poston missed the birdie putt and settled for par.

“He shouldn’t be too upset, should he, David?” said Hicks, talking to analyst David Feherty.  “Can’t be too upset. You’re not allowed to. Golf gods don’t like like, no one likes it, your playing competitors. Stop whining and tap in for your par — you’re lucky.”