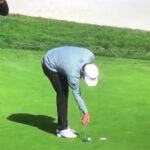 Sebastian Cappelen had hit his tee shot on the 176-yard, par-3 17th at Pebble Beach to about 10 inches. He was two strokes away from the projected cutline on his eighth hole, and this would take it down to one during Friday’s second round of the AT&T Pebble Beach Pro-Am. Cappelen had a birdie putt.

“Hold on, this is the Mark Hubbard,” analyst Mark Immelman said on the Golf Channel broadcast.

The Mark Hubbard. Or, as Hubbard called it when he putted with it three weeks ago, The Snail.

Cappelen’s caddie took out the flag, and Cappelen stood behind his ball, his right hand slightly lower than his left on the grip in a traditional-looking setup. Then, in one motion, while keeping his left hand in place, Cappelen extended his right arm out to his right, then forward, before bowing forward and wrapping just his right pinkie around the lower third of the shaft. The Snail had come out of its shell.

“What are we calling that? The Snail? Is that what it’s called that new putting stroke?” analyst Nick Faldo said on the broadcast.

“I’ll leave that up to you,” Immelman said.

Cappelen made the putt, handed his putter back to his caddie and smiled. He moved to even par with 10 holes to play, and the projected cut was one under.

Three weeks ago, at the American Express tournament, Hubbard was on his final green and far from the cutline when he unveiled The Snail. His motion was a bit more pronounced — Hubbard gyrated as he lowered himself — and he missed his 6-footer.

Immelman’s brother, Trevor, said the stroke was “next level” on that broadcast.

“So everything looks good right about now — posture looks great — but the extension in the right arm is where it’s at, and the pinky, the pinky just sticking out there, and now wrapping around the lower part of the shaft, that’s just textbook technique,” Immelman, playfully, analyzed.