Pro jokingly says how far he’d go to play with Tiger Woods at the U.S. Open 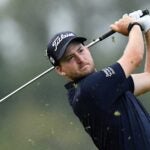 Lee Hodges is playing in this week’s U.S. Open at Winged Foot Golf Club. He qualified for it after winning the Korn Ferry Tour’s Portland Open early last month. It will be Hodges’ first major championship.

Hodges has dreamed of this day. He’s dreaming of possibly Saturday, too. Here goes:

Hodges is playing during the third round. He’s a few shots ahead of his favorite golfer. Hodges is standing on 18.

He’d really, really like to play with Tiger Woods on Sunday.

“That’s what I was telling my caddie: If we’re playing the U.S. Open and he’s five shots behind us on Saturday, or, whatever, Friday, and we have to make a quad to play with him, we’re making a quad,” he said a few weeks ago on the Korn Ferry Tour’s “Golf Next Wave” podcast.

Hodges had been close to just watching Woods. Forget playing with.

He entered the Portland Open 15th on the Korn Ferry Tour’s regular-season points list. The top five received exemptions into this year’s U.S. Open, and Portland was the last event to earn points. Hodges won, his first victory on the Korn Ferry, and moved up to third in the standings.

“It will be sweet to play in a major,” Hodges told AL.com. “It will be special. I’ve always admired the U.S. Open. The way you have to play out there, it’s proper golf. I think I play a lot of proper golf, and I hope to go and play well.”

Hodges said he called family back home in Alabama after the victory.

Hodges, 24, told the “Golf Next Wave” podcast that the first major championship he remembers watching is the 2008 U.S. Open. At that tournament, Woods dropped a 12-foot putt on the 18th hole at Torrey Pines to make a 18-hole playoff with Rocco Mediate, and he won it the next day.

Twelve years later, Hodges is playing on the same course as his favorite golfer.

He could be playing with him, too.

“I don’t know if I’ll be able to take the club back,” Hodges said on the podcast when asked what would happen if were to be paired with Woods. “I’m just kidding. He’s awesome. He’s a phenomenal athlete and the way he competes – he’s the greatest to ever play, in my opinion. It’s hard not to like the greatest at anything.”