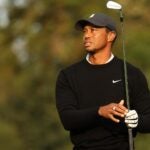 Many people have written off Tiger Woods' chances at this week's U.S. Open at Winged Foot — but we're here to offer some optimism.

MAMARONECK, N.Y. — On the surface, things aren’t setting up particularly well for Tiger Woods at this week’s U.S. Open. The rough is famously long, which is hard on his achy back. The mornings are cold, which makes it tougher for Woods to get “activated.” The greens are particularly slippery, and Woods has battled a balky putter. Even the wise folks in the big desert are cooling on Woods; he’s down to 40-1 at some sportsbooks. Woods has no chance at Winged Foot — right?!

Not so fast, my friends! We’re here to drop some optimism, to infuse some life back in the Tiger Woods support squad. Let’s battle through the fog and instead focus on a few reasons to feel good about Woods’ chances this week.

Let’s start with the statistic that inspired this missive to begin with, a fascinating nugget unearthed by professional nugget-unearther Justin Ray, who works for the 15th Club. Ray tweeted out this fact: Since 2015, there are 93 players with 12+ weekend rounds in majors. And the player with the best scoring average over that span is Tiger Woods!

Let that sink in. Woods has been the best weekend major golfer since 2015 — the supposed sunset period of his career. Better than any of the fellas who have topped the world rankings over that time period: Very Good Golfers like Dustin Johnson, Rory McIlroy, Jason Day, Jon Rahm, Justin Thomas, etc. Better than all of them!

But back to the good stuff! In 2018, Woods had a nice weekend at the Masters, contended at the Open and finished solo 2nd at the PGA. In 2019, you’ll recall that he won the Masters, missed the cut at the PGA, had a weekend rally for a T21 finish at Pebble Beach and missed the cut at the Open. In 2020’s only major, he played nicely in a Sunday 67, though that only got him to T37. Here’s the point: Woods hasn’t made all his major weekends in recent years, but when he has? Nobody has been better.

So if Woods can just stay somewhere near contention on Thursday and Friday, well, buckle up.

Woods had plenty of time to prep for this week’s event, which meant he has been able to approach it on his own schedule. On Wednesday, he was the first one out on the course, teeing off at 6:45 a.m. in the near-darkness. He’d left property by the time most players were eating breakfast and should be fresh and ready for Thursday.

He got the tee time he desires.

We don’t know exactly how the weather will affect one side of the draw versus the other, but Woods has said that he prefers the early Thursday, late Friday tee times so he has plenty of time in between rounds. The USGA seemed to oblige that preference, giving Woods an 8:07 a.m. Thursday tee time followed by a 1:27 p.m. time Friday.

He’ll be playing with a friendly face.

Two friendly faces, really. Woods is grouped with Justin Thomas and Collin Morikawa, which seems like a good thing for two reasons. For one, Woods seems to play more golf with Thomas than anyone else in the world. For another, it can’t hurt to watch the swings of perhaps the game’s two best ballstrikers at present. As CBS’ Kyle Porter pointed out, this must be the first time in Woods’ career that he’s arguably the third-best irons player in the group.

He’s got a revamped weapon.

I don’t have any stats to back this up but I’m pretty confident that every golfer who has ever tried out a new putter grip instantly putted better, at least for a round or two. Woods put an old-school Lamkin grip on his old-school Scotty Cameron putter (about which you can read far more than you need right here, courtesy our guru Jonathan Wall) and that alone is reason to believe.

That must be worth something still, surely.

'It's very frustrating': Rickie Fowler opens up on recent slump