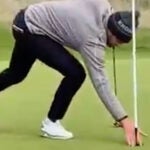 Christopher Feldborg Nielsen grabs his ball from the hole on Friday on the 18th hole at Ledreborg Palace Golf Club.

There’s making a birdie on the final hole on the way to a win. On the LPGA Tour on Sunday in Korea, Jin Young Ko did this. And about a half-day later, at a Champions Tour event in Virginia, Bernhard Langer did it, too.

There’s also making an eagle. On the PGA Tour, in his home country of Japan, Hideki Matsuyama did it.

And there’s what Christopher Feldborg Nielsen did.

Feldborg Nielsen made an albatross. A two on a par-5. He’d then win his event in a one-hole playoff. He’d win his season’s points race. He graduates to a higher tour.

All after one swing. From the rough no less.

As first pointed out by the Fire Pit Collective’s Ryan French, it came during Friday’s final round of the Road to Europe Tour Final on the Nordic Golf League, a development tour on the European Tour. On the 651-yard, par-5 18th at Ledreborg Palace Golf Club in Lejre, Denmark, Feldborg Nielsen, from off the fairway, holed his second shot, and it vaulted him into the lead in the season-ending tournament.

For Feldborg Nielsen, the win earned him the top spot in the GolfBox Road to Europe 2021, the tour’s season-long order of merit. It also secured a spot next season on the Challenge Tour, the European Tour’s equivalent of the Korn Ferry Tour. The 29-year-old from Sweden has played 30 events on the Challenge Tour, making 11 cuts, with a tie for 14th at the Made in Denmark Challenge in 2018 being his highest finish.

And it all comes on one of the hardest shots in golf to pull off. According to a story on pga.com, which cites the Double Eagle Club, the odds of making an albatross are six million to one.