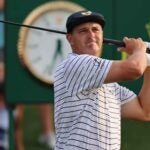 Bryson DeChambeau is in contention on Sunday at the Players Championship.

With the second round of the Players Championship finishing up early this morning, we’ve officially reached the final round at TPC Sawgrass. You can find full final-round tee times at the bottom of this post.

Notable pairings for Players Championship Round 4

A surefire sign for a top-tier golf tournament is a loaded Sunday leaderboard, and golf fans should be happy to know we’ve got just that for Sunday at the Players Championship. The the most notable pairing for the final 18 at the Players Championship is also the final pairing — in which Lee Westwood and Bryson DeChambeau will battle for the second consecutive week. Westwood (-13) holds a two-stroke lead over DeChambeau (-11), and a three-plus stroke lead over the remainder of the field.

Westwood and DeChambeau will look to fend off Doug Ghim and Justin Thomas, who make up the penultimate pairing and each enter the final round at 10 under. Also of note, Jon Rahm and Paul Casey will be the first group of contenders to come through the famed closing stretch at TPC Sawgrass on Sunday.

Below, you can find complete round four tee times for the Players Championship.