Doug Ghim: 5 things to know about the 24-year-old contending at the Players 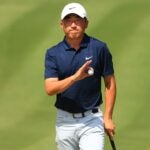 Doug Ghim is competing in his first ever Players Championship.

The top of the leaderboard at the Players Championship is full of star power. There are young stars like Justin Thomas and Bryson DeChambeau, and even old stalwarts such as Lee Westwood and Paul Casey. But there is also a name you might not be familiar with near the top — Doug Ghim.

If you don’t recognize Ghim, you are forgiven. He’s only in his second year on the PGA Tour, and this is his first appearance in the Players. But make no mistake, this 24-year-old has some serious game.

Outside of a late bogey on the 16th hole on Moving Day, Ghim has been near perfect over the last two rounds as he’s fired rounds of 67 and 68 to earn himself a late tee time come Sunday. It will be Ghim’s first time in the limelight on the biggest stage, but if history is any indication, he’ll be up for the occasion.

Here are five things to know about Ghim.

1. His swing is self-taught

Ghim’s swing might look a bit odd to golf swing purists, but that stems from the fact that during his junior golf days, his swing was entirely self-taught. Ghim’s father, Jeff, served as his swing coach during junior golf, and even built a hitting bay in their suburban Chicago backyard because they couldn’t afford a club membership.

Ghim has since enlisted the services of Las Vegas-based swing coach Drew Steckel, but the foundation of his swing was built with the help of his father.

2. He had a decorated amateur career

After a standout junior career, Ghim headed to Austin to play for the Texas Longhorns. In his four years, he put together an excellent career for head coach John Fields as he and fellow Tour players Beau Hossler and Scottie Scheffler led the Longhorns to an NCAA runner-up finish in 2016.

Ghim was a three-time All-American while in Austin as he won three times in Burnt Orange, culminating in winning the Ben Hogan Award his senior season. He also finished runner-up in the U.S. Amateur in 2017.

Thanks to reaching the finals of the 2017 U.S. Amateur, Ghim earned an invitation to the 2018 Masters. Once on the grounds of Augusta National, he took advantage.

Ghim made three eagles on the week at the Masters, eventually finishing T50 to beat out Doc Redman for low amateur honors. As an added bonus, Ghim had his father on the bag for the week.

Ghim earned his Tour card as a result of finishing in the top 25 during the Korn Ferry Tour Finals — and he did it in dramatic fashion.

Coming to the final hole at the 2019 Korn Ferry Tour Championship, Ghim needed a par on the difficult finishing hole to secure his card. After a solid drive, he pulled his approach into a deep greenside bunker. He then blasted out to 10 feet and calmly sank the putt to punch his ticket to the big leagues.

5. He struggled during his rookie year on Tour

While fellow rookies such as Scottie Scheffler and Harry Higgs found success early on Tour, Ghim struggled during his first year at the game’s highest level. He made just five cuts in 16 events and finished outside the top 150 in the FedEx Cup standings.

In normal years, this poor play would have relegated Ghim back to the Korn Ferry Tour, but because of the Covid-altered schedule, he earned a reprieve. He’s taken advantage of the second-chance this season, making nine cuts in 12 events with six top 25s and sits 65th in the FedEx Cup.