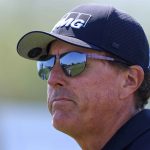 Phil Mickelson shot a four-over 75 in the first round at Torrey Pines.

LA JOLLA, Calif. — You know, with some movie stars, how they look so different from one public appearance to the next? Michelle Pfeiffer, for instance. You might see her at a shop opening in West L.A., and she could look like the Southern California Vons checkout girl she once was. And the next night she could be on David Letterman in a gown looking for all the world like the second coming of Grace Kelly.

Phil Mickelson at the Masters in April, where he barely made the cut, didn’t look like Phil winning the PGA Championship in May. And that Phil, in the heat of Kiawah and loving the hunt, didn’t look like Phil on Thursday, in the first round of the U.S. Open, here at the South Course at oceanfront Torrey Pines, down the hill and the road from his house in Rancho Santa Fe.

They began on 10. Mickelson hit a perfect putt from 12 feet to save par there. Perfect, except that it didn’t go in. He was walking faster than he was at Kiawah. You could see it.

A par on 11 and another on 12. Then, on 13, a monster par-5, a drive in the right rough. There were spectators practically on top of him, cellphones chiming as he played his second shot from the juicy stuff. He backed off the shot three times. A shove job. He took a drop for his third and did well to make bogey. He took it out on his gum. He was chewing it harder than he did at Kiawah. You could see it.

He turned at two over.

Now his parents were following him, Mary Mickelson and Phil Sr., who was wearing a lightweight quilted U.S. Ryder Cup jacket, from the 2018 event, held outside Paris. Very stylish, but Mr. Mickelson, a retired pilot, doesn’t seem to be a man looking for style points. The parents have lived all their married lives in San Diego.

He’s an elfin man, and just as nice as nice could be. He says he likes to listen to what the fans say about his sons, plural. Phil is playing and his brother, Tim, is caddying. Generally, Mr. Mickelson says, the comments are very, very positive.

Phil makes a bogey on 6. He’s walking fast, chewing hard. People are calling out his name and he’s raising his thumb, as he does. As he’s been doing for decades. He’s not quite as slender as he was at Kiawah. (He wears his shirts so tight, you can see a slice of cake.) He was 50 then. Now he’s newly 51. He makes another bogey on 7.

His playing partners are still on the green. Phil goes off by himself, standing on a little hill beside the green, yardage book in his right hand, golf glove in his back-left pocket, his bespoke trousers clinging to his socks. He’s staring off into nothing. He’s finally still.

Walking to the 9th green, he sees a tanned skinny kid with braces on his teeth and a hoodie inked with the distinctive logo of Goat Hill Park, a beloved muni a half-hour to the north, in Oceanside. Phil doesn’t know that the kid can shoot par on a good day. He hands the kid his game ball, stamped not with a number but his emblem, Phil in silhouette, in black. The same emblem appears on the back of his black shoes, but in white. Of course the boy is not going to play with this golf ball, with this gift from the closest thing golf has to a movie star.

He closes with a par on the 9th. It’s been an ordinary round, really, except stars don’t do ordinary. The 9th green is 600, 700 yards away from the interview area. Phil’s parents are going in the opposite direction. They’re parked well beyond the 9th green. They’re looking for the exit off the left side of the 11th hole.

Probably the last thing Phil wants to do is an interview, after that day, after signing for 75, four over par. But he does, because he must. Because he’s a pro. He won the last major. He’s playing at home. He’s trying to win his first U.S. Open — at 51 — and complete the career grand slam. He wears his sunglasses for the occasion.

One of his longest answers was about the chiming of cell phones, a “video ding,” as he described it.

“It’s part of professional golf,” he said. “You have to learn to deal with it. I don’t understand why you just can’t turn that little button on the side into silent. I probably didn’t deal with it internally as well as I could have — or as well as I need to.”

One of his shortest answers was about how he spent his birthday on Wednesday.

“I played golf early and then hung out with Amy in the afternoon,” he said.

Then came a question about his parents.

This is a home game. Golf’s greatest star is working at home this week. He’ll probably shoot 68 in the second round. You can’t keep a star down. Stars rise.