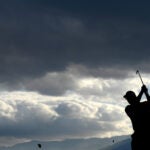 Phil Mickelson hits his tee shot on Friday on the 17th hole on the Stadium Course at PGA West.

Phil Mickelson, on the 10th hole on the Stadium Course at PGA West, had a 12-footer for birdie. It slid past the left side of the cup. Before it even stopped rolling, he said, “God dang it,” then shook his head.

“Tough to make a birdie when you can’t make a putt,” he added.

Mickelson made putts during Friday’s second round of the American Express. For par. He also didn’t chip-in, pitch-in or hole-out for birdie (or better). Nor did he make bogey (or worse). Eighteen holes. Eighteen pars.

For the first time in 2,201 rounds on the PGA Tour. Spanning all the way back to Feb. 21, 1988, and the Shearson Lehman Hutton Andy Williams Open.

From Phil the Thrill.

Par for the course.

“Which is surprising because I really try to hit fairways and center of the greens and just make easy pars, and for that to be the first time, it’s really shocking,” said Mickelson, tongue firmly in cheek.

Mickelson hit 13 of 18 greens in regulation. Meaning he had 13 putts for birdie. He missed them all.

On his closing hole, as his playing partners finished up, Mickelson exhaled deeply and shook his head. He’s the host of this week’s event, so he’ll be around. Next week, he’ll play the Farmers Insurance Open at Torrey Pines, also the site of this summer’s U.S. Open.

“So looking at the scores, you’re going to say, gosh, you played two-over par, pretty easy courses, pretty poor start, but I feel like there was a lot of good things to take from this week, even though the scorecard’s not going to show it,” Mickelson said. “I’m driving the ball well. I’m hitting a lot of good shots. My putting is, needs some work, but I have been putting good for a long period of time so I don’t feel as though it’s going to require a lot of effort. But I’ll go back and work on it and try to get ready for next week in San Diego.

“But there’s a lot of good things to take from it, the way I’m driving the ball, my iron play. There’s a lot of positives. But if you look at the scorecard, it’s pathetic. I’m not denying that. But I think that it’s a little bit closer than it looks.”