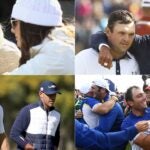 The 2018 Ryder Cup had a little bit of everything, including a thorough European victory.

The 2021 Ryder Cup is just around the corner with juicy storylines aplenty, and believe it or not we are now three years removed from the last Ryder Cup, when Europe trounced the U.S. 17.5-10.5 in Paris in 2018. But what a week that was. Stars struggling, drama-filled press conferences, the calling out of captains and even an alleged late-night altercation between two of America’s biggest stars. What a week indeed.

So before we officially focus on the 2021 Ryder Cup at Whistling Straits (Sept. 24-26) — and there’s a lot to unpack there — let’s take one last look at that crazy week in France.

Tiger Woods finished the week 0-4 for his first-ever winless Ryder Cup in his eight appearances. Woods, who just days before won the Tour Championship, wasn’t alone. While every European player earned at least one point, Woods, Bryson DeChambeau and Phil Mickelson were all winless.

“Well, it’s disappointing because I went 0-4, and that’s four points to the European team,” Woods said. “And I’m one of the contributing factors to why we lost the Cup, and it’s not a lot of fun.”

Jon Rahm called his singles win over Woods the “best feeling of my life.”

The week was actually pretty quiet, for the most part, until Reed’s wife, Justine, started responding to tweets on Sunday morning. U.S. captain Jim Furyk split up the Reed/Jordan Spieth pairing in Paris despite their 5-1-2 combined record in two previous Ryder Cups. Instead, Spieth went 3-1 with Justin Thomas, and Reed went 0-2 with Tiger Woods.

Mickelson, who had been a part of every Ryder Cup since 1994, dunked his ball in the water on the par-3 16th at Le Golf National during Sunday singles, took his hat off and conceded the hole, match and Ryder Cup. That 3-and-2 victory for Francesco Molinari gave Europe the 14.5 points it needed to win. It was very likely Mickelson’s last Ryder Cup as a player. He’ll be at Whistling Straits but as a vice-captain, and will be 53 during the 2023 Ryder Cup.

Don’t tell him he can’t! McIlroy finished the week 2-3, losing his singles match to Justin Thomas, but this raw emotion was some of the best we saw all week from anyone.

Several hours after Reed’s wife took to Twitter and made comments about Furyk breaking up the Spieth/Reed duo, Spieth and Reed were asked in their Sunday night press conference if they were surprised their successful pairing was broken up.

Spieth and Reed looked at each other, and Spieth ended up fielding the question as Reed smiled in his direction. “We were totally involved with every decision that was made,” Spieth said. Later that night, however, Reed sounded off in an interview with The New York Times.

“I was looking at (Spieth) like I was about to light the room up like Phil in ’14,” Reed told The Times, referring to Mickelson’s 2014 Ryder Cup press conference in which he criticized U.S. captain Tom Watson.

“The issue’s obviously with Jordan not wanting to play with me,” Reed continued. “I don’t have any issue with Jordan. When it comes right down to it, I don’t care if I like the person I’m paired with or if the person likes me as long as it works and it sets up the team for success. He and I know how to make each other better. We know how to get the job done.”

Reed also took issue with his afternoon benching on Friday and Saturday, saying: “For somebody as successful in the Ryder Cup as I am, I don’t think it’s smart to sit me twice.”

A day after the Ryder Cup finished, The Telegraph reported that U.S. stars Dustin Johnson and Brooks Keopka were involved in a heated exchange in the European team room on Sunday night. Golf Channel’s Tim Rosaforte later confirmed the report.

“The source of the friction was not known, and the dust-up was considered unusual because Johnson and Koepka appear to have a very close relationship,” Rosaforte said.

In his first interview since the alleged altercation, speaking at the Dunhill Links Championship in Scotland, Koepka denied there was any argument with Johnson.

“This Dustin thing, I just don’t get,” he said. “There was no fight, no argument. He’s one of my best friends. I love the kid to death. We talked on the phone Monday and yesterday, so you tell me how we fought.”

Fast forward two years later, through 54 holes at the 2020 PGA Championship at TPC Harding Park in San Francisco, and Koepka made a not-so-subtle jab at Johnson’s major total.

“I like my chances,” Koepka said. “When I’ve been in this position before, I’ve capitalized. I don’t know, (Johnson’s) only won one. I’m playing good. I don’t know, we’ll see.” He later added: “I was glancing at the leaderboard and of the 10 guys that are up there, there’s been, what, three majors? DJ has been in this spot a couple of times and he hasn’t been able to capitalize.”

Turns out, Collin Morikawa capitalized, firing a final-round 64 and winning by two. Rory McIlroy, after his final round, was also asked about Koepka’s comments about DJ.

As the Ryder Cup dust settled, the European Tour released a video on Monday morning featuring its two stars of the week — Francesco Molinari and Tommy Fleetwood, who teamed up for a 4-0 record. They accounted for nine of Europe’s points, as Molinari was also able to add a singles win on Sunday. The duo was so good it was dubbed “Moliwood.”

Sadly, there will be no Moliwood this year, as Molinari did not qualify for the team, but we’ll always have 2018.