Phil Mickelson might’ve just played his last ever round in the U.S. Open 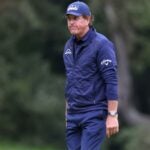 This might've been the last U.S. Open round Phil Mickelson ever plays.

Phil Mickelson’s U.S. Open bid at Winged Foot ended with a whimper. A three-putt bogey on the par-5 9th bookending another disappointing trip to the legendary Mamaroneck golf club.

The last time he walked off the green after playing the final hole of a U.S. Open at Winged Foot was also disappointing, but a bit different. Instead of ending his U.S. Open bid with a whimper in 2006, he ended it with a bang — his run at the title torpedoed with a disastrous double bogey on the 18th.

“I just can’t believe that I did that,” Mickelson said at the time. “I am such an idiot.”

This time there was no self-deprecation, just disappointment in his voice as another year comes and goes without Mickelson able to claim the one win he craves so deeply. Perhaps he sensed it, the fact that this could conceivably be the last time he ever tees it up in a U.S. Open.

In his advancing age, there’s no guarantee Mickelson can qualify for the U.S. Open again as he battles Father Time. He sits at No. 52 in the Official World Golf Rankings currently, but it’s no given that he stays in the top 60 by next summer. If he falls outside that threshold, he’ll have to go through the rigors of qualifying. It wouldn’t be impossible, but it’s no guarantee, either.

He got lucky to qualify automatically this year. He sat in the mid-60s of the OWGR in mid-March (solidifying his spot in the field after the pandemic threw a wrench in qualifying and turned the field into a de facto invitational), but his ranking was in freefall. If the season hadn’t been stopped, who knows if he would have even had a chance at a Winged Foot redemption.

But he did, and he headed back to New York with the opportunity to pen one of the all-time great golf redemption tales. While it felt unlikely, there was reason for optimism. Mickelson finished T2 at the WGC-FedEx St. Jude Invitational in early August, and he added a victory in his Champions Tour debut a few weeks later. But the steady game he showcased over those two weeks was nowhere to be found at Winged Foot.

With two Mickelson-esque birdies from the trees to begin the championship, there was a brief moment when the storybook redemption story seemed realistic. But those unlikely birdies proved to be the exception rather than the rule. He failed to record another birdie during the opening round — though the squares on the scorecard were abundant — as he limped to a 79. Round 2 was much of the same. One birdie, five bogeys and an early flight back home.

“I enjoyed the week and I enjoyed the challenge that this golf course provides.,” Mickelson said after the round. “I think it’s a terrific place to play golf, and I’m appreciative of the opportunity to have been able to compete here. I’m disappointed I didn’t play better.”

Disappointed is probably an understatement, considering how much this championship means to Mickelson. Especially so when examining his resume that includes an absurd six (!) runner-up finishes in the event, spanning from Payne Stewart’s historic victory at Pinehurst to Justin Rose besting him on a baked-out Merion.

Disappointed is the same phrase he used back in 2006 to characterize his emotions. There was less on the line when he walked off after his final hole today, but the hurt was obvious. It was apparent in his eyes, and in his voice during an outburst following yet another errant drive during Round 1. Mickelson has won five majors and 44 PGA Tour events in his career, but it’s almost a given that he’d trade some of that hardware in to see his name engraved on the U.S. Open trophy just once.

If this does turn out to be the last time we see Mickelson in a U.S. Open, the fans will miss him. The media will, too. It’s always an intriguing storyline to follow during U.S. Open week, wondering if he’ll finally pull it off.

When asked if he’d given any thought to the fact that he might have just struck his last U.S. Open shot, the usually talkative Mickelson was brief.

And then, just as he did in 2006, he headed for the parking lot to start his journey home — that same disappointment looming over him.