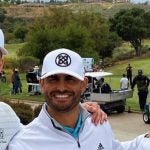 From left, Victor Lopez, Marco Contreras and Estes Rodriguez last Wednesday near the 7th hole at the Maderas Golf Club — with Phil Mickelson in the background.

“He’s right there. He’s taking his jacket off.”

Victor Lopez is holding his phone out now, when his buddy, Marco Contreras, can’t help himself.

One hole earlier, Lefty did them one better. Or 100 ones better.

Before we get any further, some important background. During the week, Lopez is a 22-year-old who works in politics. During the weekend, Lopez is Mickelson. “I live by the Phil quote, or it’s like a tweet that he put out,” Lopez said. “He’s like, 180 ball speed or whatever that he was hitting on the tracker. And then someone replied, they were just like, but yeah, did you hit a fairway? And then Phil goes, does it matter? We’re still hitting bombs, baby. I live by that.”

Back to the Maderas clubhouse.

“All of a sudden we hear, oh, Phil Mickelson is supposed to be here,” Lopez told GOLF.com. “Like one of the managers from the Maderas Golf Course told us. So it was supposed to be low key. And we’re like, oh, OK, that’s sick.”

On the 6th, one hole before their detour, a man drove up with both a message and money from Mickelson.

Sorry for the inconvenience, fellas. Here’s a Benjamin.

They’d drive by 7. About 30 yards past the green, they watched the filming and took a few photos — in one posted to Instagram, Mickelson is clanging together two bottles of beer and smiling. (Amstel Light, in fact, commented on Lopez’s post and offered to ship some beer.)

They’d eventually get to 8. A 100 bucks richer from Mickelson’s wallet, where’d you end up, Victor?

“I’m like, hey, channeling that Phil Mickelson energy, and then I hit a hard slice on hole 8,” Lopez said. “It was funny as hell.”

“And then he turned around, and he was like, hey!

“And then I’m like, thanks for repping San Diego, man.

“And then he just waves off and walks into the clubhouse. I don’t know if he was eating or going to a bathroom break, but he was grinding, for sure.”

Did Lopez ever think of asking for more?

“Honestly, who wouldn’t think about asking for more, but even though I would have wanted to do all these things — honestly, I thought it would have been super cool to maybe hit a shot off the tee with Phil because driving is the best part of my game,” Lopez said. “But no, I have so much respect for Phil. I know he’s a busy guy. I’m sure he’s got a bunch of fans trying to hound him and everything.

“He could have not just given us a 100 bucks. It wouldn’t have changed anything — none of us were expecting it. If anything, it’s just out of respect for Phil. I would skip a hole for Phil any day of the week. I would skip a whole round for Phil if that’s what I needed to because honestly he’s one of the GOATs.”