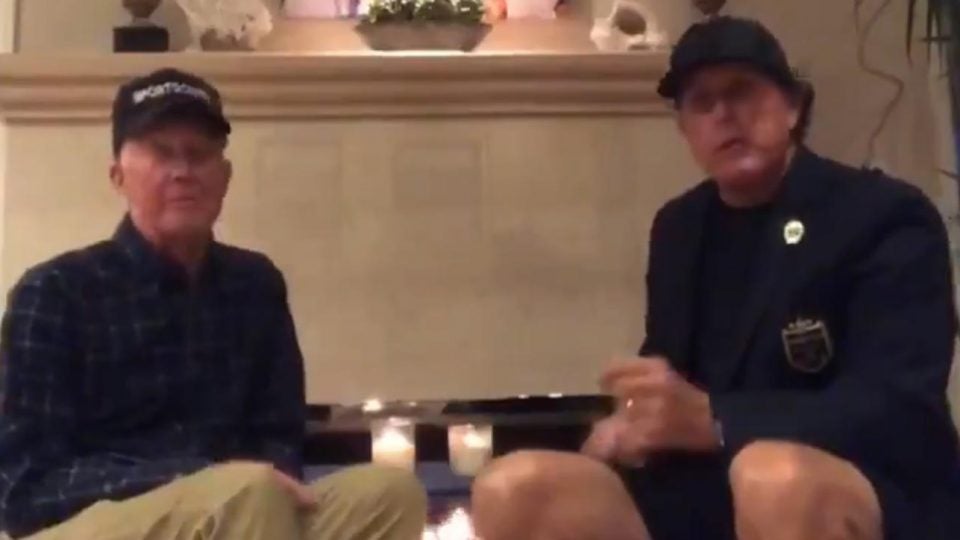 Phil Mickelson with his dad on the latest Phireside with Phil chat.
@PhilMickelson

Before hunkering down for Thanksgiving, Phil Mickelson fired off his latest Phireside with Phil chat on Wednesday. But this wasn’t just any Phireside with Phil, it was a “special two-candle, real-fire edition,” featuring an appropriately special guest, Mickelson’s dad Phil.

The video as a whole is zany in perfect Phil Mickelson style, even down to the tiny kids’ chairs he and his dad sit in, filmed in front of the fireplace at Phil’s childhood home, which is an important detail, as you will soon see.

Mickelson begins the video by introducing his dad, who he describes as “a man of very few words” who wanted to come on the show and tell a story from Phil’s childhood. The elder Mickelson, however, does not get his wish.

Instead, Phil plows forward and tells the story himself, without letting his dad utter a single word. But it’s worth hearing, no matter who tells it.

One night long ago when Phil and his sister, PGA pro Tina Mickelson, were 4 and 6 years old, they went to their dad and asked if they could eat some of the Halloween candy they’d recently trudged around the neighborhood collecting. But when their dad said no because it was too close to dinner time to eat candy, the kids took the situation into their own hands.

Phil and Tina snuck upstairs into her bedroom closet where the candy was hiding and began stuffing their faces. Before long, their dad arrived and the jig was up. But the punishment that ensued was the real kicker.

“My dad came up and knew exactly what we were doing, caught us and took all the candy and burned it right here in this fireplace,” Mickelson says deadpan to the camera.

While everyone was upset, including their mother, Phil did take one life lesson from the whole encounter, which he shares to close out the video, “sometimes the people smallest in stature are the ones you want to mess with the least.”

Check the video out for yourself below.

My special guest is my dad who is a man of very few words. #PhiresidewithPhil pic.twitter.com/r0Z3SRg5Hs