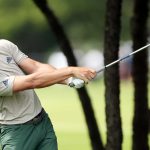 Sam Burns hits a shot on Saturday on the 12th hole at TPC Craig Ranch.

On Thursday, during the first round of the AT&T Byron Nelson, he teed off at 12:33 p.m. local time, shot a nine-under 63 and grabbed a share of the lead. On Friday, he teed off five hours earlier, shot a two-under 70 and tumbled down the leaderboard. The time correlation was not lost on him.

“When I wake up at 4:30, I’m in a bad mood just as most people probably are and I needed to kick that today,” he said. “I think yesterday even when I wasn’t playing a good hole, I was kind of laughing at the miss or chunked it and laughed. Today, I had a shorter fuse.”

You might want to stand a chip shot away from Spieth on Sunday.

“I’m a very optimistic person, and that is part of the plan, is by doing so, it gives us a chance to play golf,” Ken Tackett, senior tournament director, said of the changes. “If we need to stop because of lighting, depending on how much time, you know about 13 and a half hours of daylight from sunrise to sunset, and so it gives us the best chance to get done tomorrow.

Below are the ways to watch the event, tee times and a way to bet on the tournament for free.

How to watch AT&T Byron Nelson Round 4

How to bet on the AT&T Byron Nelson — risk free!