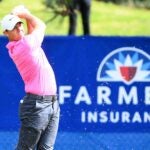 Remember when the FedEx Cup Playoffs were four weeks long? And when that extended deep into September? That all changed a couple years ago because the PGA Tour doesn’t enjoy competing with the NFL.

In the chase for more TV viewers, it’s not easy competing with America’s most popular sport. So why try? The Farmers Insurance Open is thinking exactly that way. The Tour event held annually at Torrey Pines is set to host the 2022 iteration from Wednesday to Saturday, Jan. 26-29, in order to avoid competing with the two league championship games held on Jan. 30 that decide who advances to the Super Bowl.

Not only that, with the event being played on the west coast in San Diego, event organizers are planning to alter tee times in hopes of creating a primetime finish on the east coast. The finish time, barring a playoff on Saturday or any weather delays, will be approximately 8 p.m. ET for the both the third and final rounds. Saturday Night Golf, folks! Get on board.

“We appreciate Farmers Insurance’s collaboration and innovative thinking with this shift in competition days,” Tyler Dennis, Tour Chief of Operations said. “The PGA Tour’s first network event of 2022 wrapping up on Saturday combined with football games the following day will create an action-packed weekend for sports fans.”

In years past, this weekend has been a tricky one for football-loving pro golfers, media members, etc., but no one more than Jim Nantz and CBS. The event kicks off CBS’ golf coverage for the calendar year, and often Nantz has been forced to choose football over golf on Sunday. Now, he’ll likely be in San Diego during the start of the weekend and headed to wherever the AFC Championship is being played on Sunday.

It is unclear if this change will be a lasting one beyond the 2022 season, but it’s totally plausible. Tour events tend to hold the same place in the calendar year every single year. The Farmers is a late-January event. The NFL’s Championship weekend is a late-January weekend. Depending on how successful the event feels for tournament organizers, we could see this become a permanent change.

And for the diehards who really love Sunday golf, there’s some of that still happening. The best of both worlds. The Advocates Pro Golf Association will be playing a two-day event that same weekend in San Diego, with rounds on the North Course on Saturday and a televised final round on the South Course on Sunday.