Ryan Palmer put on a ball-striking clinic on the North Course during the second round of the Farmers Insurance Open on Friday, and he’ll take the 36-hole lead heading into the weekend. Here’s everything you missed on Friday at Torrey Pines.

No one was hotter than Palmer on Friday. The 43-year-old made 11 birdies and just one bogey en route to a 10-under 62. He turned in five-under 31 and then matched it on the back nine, his only blemish a bogey on the 18th when he couldn’t find the fairway off the tee. Palmer made back-to-back birdies five different times in his round.

“I got hot on that front side and just kind of kept it going,” Palmer told Golf Channel. “Little disappointing to end with a bogey, but you hit it in the rough and you are going to pay for it.”

This is Palmer’s second 62 on the North Course. He also shot that number in the second round at the 2006 Farmers.

Palmer heads into the weekend leading Brandt Snedeker (eight under) by two and four others by three. 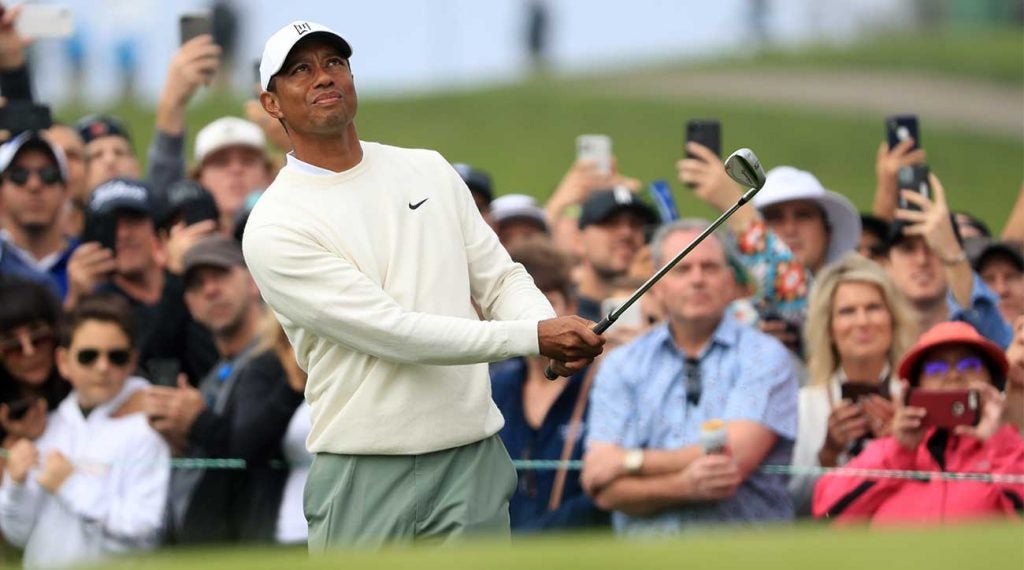 Tiger Woods chips onto the green during the second round of the Farmers Insurance Open on Friday at Torrey Pines.
Getty Images

Tiger Woods rebounded from a disastrous start to shoot a one-under 71 on the South Course, and after Thursday’s 69 he’s T17 and four under overall, which is six back of Palmer. Woods is among a group of 21 players at four under, which also includes Bubba Watson, Jason Day, Jordan Spieth, Rory McIlroy and Hideki Matsuyama.

Woods opened the day by hitting the fairway and green on the par-4 1st, but his par try from inside 3 feet slid by the hole. He missed the come-backer and signed for a four-putt double bogey — just the 13th four-putt of his career. After four straight pars, Woods bounced back with a birdie on 6 and then three straight on 8, 9 and 10. He bogeyed 12 after driving it into a fairway bunker and made another bogey on 17 when his drive found the native area and he had to take a drop. He closed on a strong note, though, making an easy birdie on the par-5 18th. He hit nine fairways, 11 greens and needed 27 putts.

“It was a good middle part of the round,” Woods told reporters afterward. “Not exactly the best of starts, but I figured it out and turned it around. Unfortunately made a mistake on 17 that cost me a shot, but good birdie on 18.”

Woods has won eight times at Torrey Pines, which includes seven Farmers and one U.S. Open (2008).

Snedeker holed this bunker shot on 15 for his third straight birdie, which at the time tied him with Palmer. He’s eight under overall and in solo second heading into the weekend.

Now that's the way to tie the lead. 🏖@BrandtSnedeker joins Palmer at the top.#LiveUnderPar pic.twitter.com/tSopjtbRxK

The aforementioned Mickelson is among the marquee players who missed the cut. Mickelson was plagued (again) by his driving accuracy. He hit just 2 of 14 fairways on Friday and 7 of 28 for the week. Mickelson ranked 185th out of 188 on Tour last season in driving accuracy (50.77 percent). He’s back in action at next week’s Saudi International.