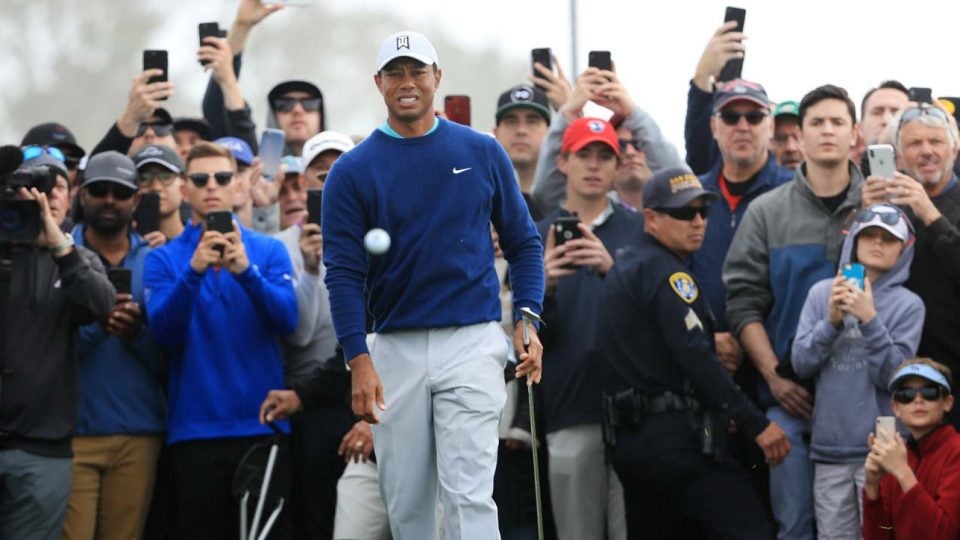 Tiger Woods watches a chip during the third round of the 2020 Farmers Insurance Open.
Getty Images

After three rounds at the 2020 Farmers Insurance Open, Tiger Woods finds himself tantalizingly close to his record-breaking 83rd PGA Tour victory. But it will take a come-from-behind performance on Sunday to seal the deal.

Woods shot a three-under 69 in Saturday’s third round at Torrey Pines to reach seven under for the tournament. That left him five shots behind leader Jon Rahm, who finished off his round of 65 to get to 12 under. The primary reason for his fortunate positioning was his stellar stretch to open Round 3, which stood in stark contrast to his start on Friday.

In Round 2, Woods opened with a shocking four-putt double bogey on the 1st, a hole that famously tortured him during the 2008 U.S. Open. But the story would be much different on Saturday.

After waiting through a two-hour fog delay Saturday morning, Tiger turned that crooked 6 into a 3, opening with a birdie to move to five under, five shots back of leader Ryan Palmer who had yet to tee off.

Things almost fell apart at the 4th hole. The long par-4 is one of the hardest on the course, and it tested Tiger to the limit. His approach went wide right into deep rough above the green. He chunked the chip and watched it roll off the putting surface into more rough. But he holed his chip from 17 feet to save par and keep the momentum going.

After another par, Woods flared his second at the par-5 6th into thick stuff to the left of the green. He did a fine job getting that chip shot to stop 13 feet away from the hole, and then rolled in the remaining putt for his third birdie of the day.

Woods followed that up with two-straight pars on 7 and 8, and then split the fairway with a 304-yard bomb on the par-5 9th. He chose to play it safe and not try and reach in two from 294 yards, and instead hit a layup to set up a wedge into the green.

He landed the ensuing shot on the back of the green, and then spun it back nearly into the hole. Though it was on a perfect line, it didn’t have enough gas, and stopped four feet away. Tiger confidentially holed that one to make the turn at four under on the round, and eight under for the tournament.

The back nine would prove far more difficult for him. He faced his first moment of adversity at the 11th, where he made bogey to fall back to seven under. He would remain there for several holes.

After a routine par at 12, he lost his drive into the left rough, and then sent his layup second shot into the right rough. A poor lie prevented him from getting close with his approach, so he was forced to settle for a two-putt par.

At 17, Tiger hit a poor approach to 40 feet that lead to another two-putt par. His final test of the day was the par-5 18th, a prime opportunity to add one more birdie to his scorecard. But things didn’t go according to plan. He recovered well from a wayward drive into a fairway bunker, laying up his second into the middle of the fairway, and then sent his third over the green into a difficult bunker. The best he could do from there was get it to 15 feet, but he buckled down and buried that one for a closing par.

Thanks to a few mistakes on Tiger’s part and incredible play from Rahm, Woods will need a great round on Sunday to have a chance. To come back from so many shots behind in the final round will be a tall order, but certainly not unthinkable. If he does, he will finally surpass Sam Snead to become the winnigest golfer in PGA Tour history.