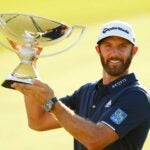 Last week, the PGA of America named Justin Thomas as the organization’s Player of the Year. Some wondered how the man who just won the FedEx Cup, World No. 1 Dustin Johnson, did not win. But now DJ is finally getting his due.

On Tuesday, Johnson shared the news on Twitter that he’d been named PGA Tour Player of the Year.

“Such an honor to be voted Player of the Year by the guys on TOUR. Hope to keep it rolling at Winged Foot!” Johnson wrote.

So how did DJ win one Player of the Year award, and JT win another? It all comes down to how the awards are determined.

The PGA of America identifies its winner based on a season-long points system. Thomas’ three wins, top finish in the money race, and third-place finish in scoring average gave him more points than Johnson, who didn’t receive credit for his Tour Championship victory because Xander Schauffele had the lowest score to par (DJ started at 10 under thanks to his FedEx Cup ranking). DJ finished fifth in the PGA of America’s POY race.

The PGA Tour does things very differently. Instead of a points system, the PGA Tour Player of the Year is determined through a vote by “members,” most of whom consist of the players themselves, hence DJ’s tweet.

It’s the second time Johnson has been named PGA Tour Player of the Year. In 2016, the year he triumphed at the U.S. Open at Oakmont, he won both the Tour and PGA of America awards.

One odd wrinkle this year is that both awards were determined before this week’s U.S. Open and the postponed 2020 Masters in November. In fact, due to the Covid-19 related schedule shake-up, the PGA Championship was the only major played during the eligible time period.

If, hypothetically, another player, say Rory McIlroy or Jon Rahm, were to win both remaining majors, they might seem like the more worthy Players of the Year. But with Johnson’s game peaking at the perfect time, he’s the prohibitive favorite heading into the U.S. Open. If he captures his second Open title this week, the PGA Tour’s award will look prescient.