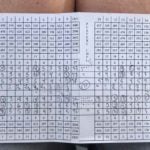 Joel Dahmen's 58 on Friday featured nothing worse than a 4.

For about two hours on Friday, Joel Dahmen, a PGA Tour pro, was one stroke better than Ian Happ, a Chicago Cub utility player.

For about three hours on Friday, Dahmen was better than Happ, his playing partners, anyone who’s ever teed it up at Mesa Country Club in Arizona, and the vast majority of those who’ve ever played the game.

After shooting 2-under through seven holes, Dahmen never made anything higher than a 3 the rest of the way, firing 12-under for his final 11 holes to – for a 32 – to set the Mesa CC record at 58, a whopping 14-under par.

“I hold the course record at all my home courses, except @mesacountryclub. That changed today with some of my good friends along for the ride. That was FUN!” Dahmen wrote on his social media feeds under a picture of both his scorecard and his playing partners, Happ, Kyle Schwarber, also of the Cubs, professional golfer Brandon Harkins, Mike Davidson and Derek Bohlen.

Dahmen was great all the back to the clubhouse.

Happ, according to another member of their group, shot a personal-best 69.

Or 11 strokes worse than Dahmen.