PGA Championship in San Francisco is cleared, but fans won’t be allowed 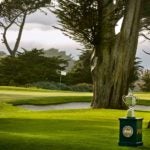 The Wanamaker Trophy at TPC Harding Park in 2018.

It will not allow fans.

The PGA Championship at TPC Harding Park in San Francisco has been approved by city public health officials, but the Aug. 6-9 tournament will be played without spectators due to the coronavirus pandemic, the San Francisco Chronicle reported Monday. The newspaper also reported that the PGA of America will make an official announcement on Tuesday.

The PGA, the Chronicle reported, had been looking at other venues in case approval could not be given. Then, in mid-May, Gov. Gavin Newsom said sports could be played in California, albeit without fans, starting in June, and in late May, San Francisco Mayor London Breed said sports would be allowed, again without spectators, beginning next Monday.

The PGA Championship will be the 10th tournament, and the first major championship, of the Tour’s revised schedule, developed after play was stopped after one round of the Players Championship in mid-March.

As of Monday afternoon, the PGA Championship’s website was still selling tickets. The Chronicle reported that refunds will be given.

The year’s other two major championships are the Sept. 17-20 U.S. Open at Winged Foot Golf Club in Mamaroneck, N.Y., and the Nov. 12-15 Masters at Augusta National Golf Club in Augusta, Ga., Each event has said it remains hopeful to have fans.

In mid-May, the USGA released a statement saying it had not made a “final determination” whether spectators would be allowed.

“Given the realities of the pandemic, we are recreating the entire championship experience for everyone involved,” the statement said. “We appreciate and understand everyone’s questions and will provide more information as soon as possible.”

In early April, when the Masters was moved from its traditional April date to November, Augusta National chairman Fred Ridley said that “future plans are incumbent upon favorable counsel and direction from health officials.”

“Provided that occurs and we can conduct the 2020 Masters, we intend to invite those professionals and amateurs who would have qualified for our original April date and welcome all existing ticket holders to enjoy the excitement of Masters week,” Ridley said in a statement.