PGA Championship playoff format: How the winner will be decided at Harding Park 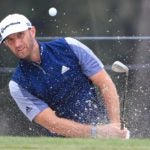 Dustin Johnson blasts out of a bunker during the final round of the PGA Championship.

The 2020 PGA Championship is coming down to the wire with a cluttered leaderboard, meaning the potential for a playoff to decide the year’s first major winner is becoming more of a reality.

If two or more players are tied for the lead after 72 holes at TPC Harding Park come Sunday night, those golfers will play the 16th, 17th and 18th holes, with the lowest three-hole total winning. If there’s still a tie, they’ll begin sudden death and play the 18th. If still tied after that, they’ll continue sudden death as needed on the 16th, 17th and 18th in a loop until one player wins.

The last time the PGA was decided by a playoff was in 2011, when Keegan Bradley beat Jason Dufner at the Atlanta Athletic Club. You can follow the final round of the 2020 PGA Championship here.