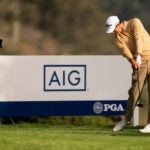 Adam Scott hits a drive during the first round of the 2020 PGA Championship at TPC Harding Park.

It’s been 380 days since we’ve had the privilege of watching major championship golf (yep, all the way back to Shane Lowry’s Open Championship victory at Royal Portrush), and on Thursday, the long drought finally ended when the world’s best teed it up for the first round of the 2020 PGA Championship at TPC Harding Park. With one round in the books, here’s everything you need to know as the second round gets underway on Friday in California.

1. The leaderboard is already fantastic

With 19 players within two shots of the lead after Round 1, the next three rounds are sure to be electric. Former PGA champion Jason Day and three-time Tour winner Brendon Todd lead the way after firing rounds of 5-under 65, with defending champion Brooks Koepka only one shot back at 4-under.

2. Bryson finally got a ruling to go his way

When Bryson DeChambeau unexpectedly snapped the shaft on his driver when he leaned on it to pick up his tee after after smashing yet another bombed drive, there was a moment when fans worried that he wouldn’t be allowed to replace the club. But thanks to a recent USGA rule change allowing broken clubs to be replaced if they were not broken in anger, DeChambeau was able to send someone to retrieve one of the backup drivers he keeps in his car. DeChambeau eventually signed for 2-under 68.

Just two weeks ago, Brooks Kopeka’s 2020 major prospects were looking bleak, and even his presence at the upcoming FedEx Cup playoffs looked questionable. But a “heated” practice session after his missed cut at the 3M Open helped him zero in on a swing flaw. After learning that he needed to work on getting back to his left side, he was a new man, contending to the end of last week’s WGC-FedEx St. Jude Invitational, where he eventually finished T2. And after firing a first-round 66 (4-under) at TPC Harding Park on Thursday, Kopeka is only one shot behind Day and Todd’s lead, and his quest for a three-peat at the PGA Championship (Kopeka won at Bellerive in 2018 and Bethpage Black in 2019) now looks downright possible, and perhaps even likely. Will he do it? We’ll have to stay tuned.

4. Tiger Woods is in the mix

Worries about Tiger Woods’ ability to perform in the cool San Francisco temperatures this week appear to have been put to rest by his round of 2-under 68 on Thursday. Not only was Woods crushing it off the tee, he also managed to make five birdies, which were unfortunately mitigated by three bogeys. He avoided any round-ruining disasters, though, and only trails Day and Todd’s lead by three shots heading into Round 2.

Brendon Todd is already a strong candidate for Player of the Year after winning twice this season, but as a co-leader in a major championship, the 35-year-old is entering uncharted territory. Can he hang on? Time will tell.

Thursday’s weather was foggy and damp in the morning, followed by bright sunshine and a pretty staunch breeze, ranging from 15 to 20 mph. On Friday, expect more of the same. Early morning tee times will be met with cloudy conditions and temperatures in the mid-50s. The sun is forecast to come out around noon, when the temperature will rise to a high of 64 degrees, and the wind is expected to blow between 10 and 17 mph.

Yes, it happened at Bethpage Black last year when three of the 20 club pros in the field earned the right to play the weekend in their national championship. The low 70 players and ties get to play on Saturday and Sunday at the PGA Championship, and after Round 1, there are three club pros in that vicinity of the leaderboard, which is about 1-over: Bob Sowards, Benny Cook and Rob Labritz. Labritz, perhaps not so coincidentally, was among the three who made the cut last year at Bethpage, eventually finishing T60.