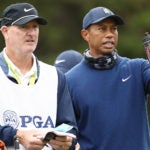 Tiger Woods and Joe LaCava stayed in the hunt on Day 1 of the PGA.

Check in each day of this week’s PGA Championship for the unfiltered opinions of our writers and editors as they break down the hottest topics in the tournament, and join the conversation by tweeting us @golf_com.

Tiger Woods made just his second start since February and opened the PGA Championship with a two-under 68, three shots off the first-round lead. What did you learn from Woods’ first major round of the year?

Michael Bamberger, senior writer: It tells me that he knows himself. That when he says the goal is to get ready for four events a year he will if he can. Last year he could get ready for one. Then he was tanned, rested and ready for Japan.

Sean Zak, senior editor (@sean_zak): That he’s not locked on a specific ball-flight, which is great. At times when Woods hasn’t played well, he’s been unable to turn the ball over from right-to-left, but he moved it both ways Thursday. That’s a good sign.

Josh Sens, senior writer (@JoshSens): That his back did not seem balky or bothered by the cool, foggy conditions he was playing in. If that old gimpy feeling doesn’t reach up and grab him, we can count on him making this a very interesting weekend.

Zephyr Melton, assistant editor (@zephyrmelton): I learned that he can still grind it out with the best of them. He obviously didn’t have his A-game, but when you can post a score a couple under in a major without your best stuff, that’s always a good sign.

Jessica Marksbury, multimedia editor (@jess_marksbury): After lots of hand-wringing about what the cool Bay area temperatures would do to his back and his golf game, today, he appeared to put those worries to rest.