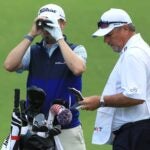 Justin Thomas checks out a yardage with a range finder.

Big changes are coming to a few major championships. The PGA of America announced on Tuesday that distance-measuring devices will be allowed during competition rounds of its three majors. The changes go into effect for this year’s events: the PGA Championship, the KPMG Women’s PGA Championship and the KitchenAid Senior PGA Championship.

The use of rangefinders had previously been allowed in practice rounds but never in competition on golf’s biggest tours or its major tournaments. Permitting them should help speed up play, as players and caddies can spend less time walking off tricky yardages.

“We’re always interested in methods that may help improve the flow of play during our Championships,” said PGA of America President Jim Richerson in a release. “The use of distance-measuring devices is already common within the game and is now a part of the Rules of Golf. Players and caddies have long used them during practice rounds to gather relevant yardages.”

Players and/or caddies can use the devices as long as they conform to Rule 4.3a (1), which allows obtaining distance information but not measuring slope or to get a recommended line of play or club.

The first PGA of America major for 2021 is the PGA Championship on May 20-23 at the Ocean Course in Kiawah Island, S.C.