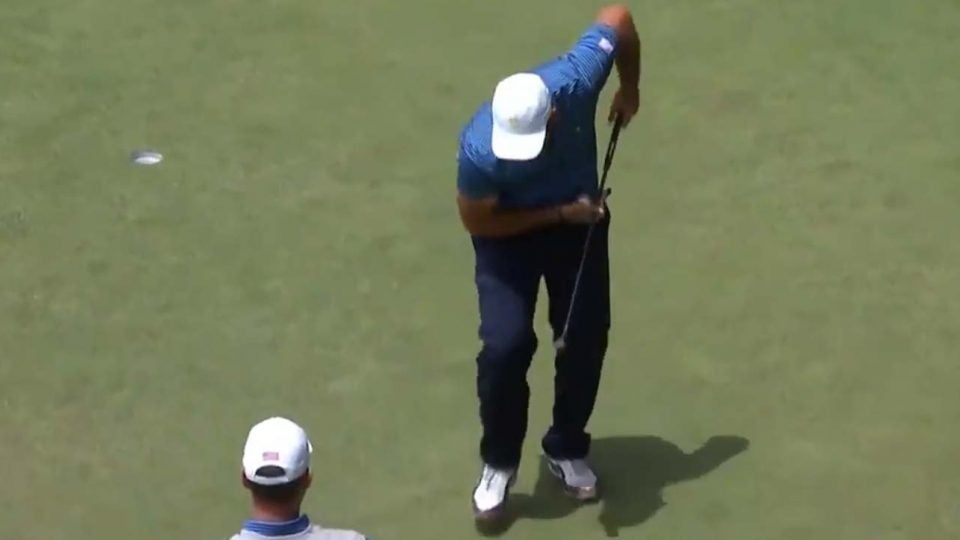 Patrick Reed makes a shovel gesture after a birdie on Day 2 at the 2019 Presidents Cup.

Australian fans at the 2019 Presidents have given Patrick Reed an earful over his controversial waste-area penalty at last week’s Hero World Challenge. On Day 2 at Royal Melbourne, Reed served the hostile crowds with a little of their own medicine.

Throughout the first two days of the tournament, Reed has been showered with jeers and jokes from fans of the International team. A favorite dig has revolved around shovels, a reference to American pro illegally moving sand in a waste bunker to improve his lie at last week ‘s Hero World Challenge, a move many referred to as “cheating” (including International team member Cameron Smith).

News
Patrick Reed endured a villain’s reception at the Presidents Cup, but he’s given this event the juice it needed

On Day 1 at Royal Melbourne, some fans carried small plastic shovels with them around the course. Among the jokes shouted Reed’s way was this by an American-accented fan, “Patrick, are you really going to make your caddie carry 14 clubs and a shovel?” It was so bad, playing partner Webb Simpson defended his teammate after the match, calling the constant comments “undeserved.”

All the while, Reed has remained silent in the face of this verbal onslaught, staying calm and focusing on the play on the course. But on Friday in his foursomes match, Reed finally offered up a response to his critics.

Again playing with Simpson in the alternate-shot format, Reed was left with a six-footer for a crucial birdie that would keep the Americans from losing another hole to Marc Leishman and Abraham Ancer.

As Reed began to make his stroke, someone in the crowd yelled “miss it!” But Reed confidentially sank the putt, earning a tie on the hole. After picking up his ball, Reed threw his hand behind his right ear in an “I can’t hear you!” gesture. Then, as he began to walk away, he threw his arms up to the crowd, then twice made an exaggerated shoveling gesture with his putter.

Reed made the birdie...and took his shovel out for the fans 👀 pic.twitter.com/OUaBJHnD2P

While Reed briefly got a small amount of revenge, it quickly evaporated at the next hole, the par-4 12th. On his very next shot after making the shovel gesture, Reed ruined a solid drive by Simpson by knocking his approach shot well long and to the left of the green.

That poor shot resulted in a bogey-5 and another loss of hole, dropping Reed and Simpson to 3 down through 12, putting them at risk of losing their second-straight match.