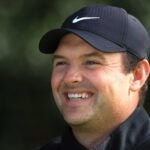 On his website, Patrick Reed’s calendar is frozen in time. The Upcoming Schedule shows Players, Valspar and the WGC Match Play. We all know how that went: canceled after one round; canceled; canceled.

But between now and the Masters, we’ll likely see a lot of Reed. He’s not playing this week, in Las Vegas. But he’ll probably play next week at the Zozo Championship, in Los Angeles, where Tiger is the defending champion. Reed often plays the same events Tiger plays — and on Sundays he, like Woods, is loyal to black slacks and a red top.

Reed, a Texan to the bone, will probably play two weeks after that, at the Houston Open, held this year at a public course, Memorial Park.

Then comes the Masters.

Last year, Reed picked up the tab for the Tuesday night dinner with the fellas, supping alongside Mark O’Meara, Gary Player, Vijay Singh and other luminaries. This year, the guys may be tempted to order seconds: Woods is signing the chit.

If you start actually thinking about the life and times of Patrick Reed, Tiger comes to mind. It was at Tiger’s tournament last December that Reed did his shoveling bit, in that bunker in the Bahamas. We all know what happened because you can see it plain as day on videotape. No need to adjudicate that whole thing again.

Reed likely would have been hung out to dry by his fellow American players, anonymously or otherwise, except for the gift of timing: right after the Bahamas tournament, the U.S. gang flew to Australia for the Presidents Cup, Reed on Woods’s team as a captain’s pick. That’s not to say the week in Melbourne was easy for Reed. At least one opposing player did skewer Reed, as did the Aussie fans, who joyously watched Reed lose with Webb Simpson on Thursday, again on Friday and a third time on Saturday.

Sunday brought a change of fortunes: Reed won his singles match, and the U.S. pulled out an unlikely victory over the Internationals. The U.S. win was like a protective shield for Reed.

There were some rough patches with fans for Reed when the new season got underway. A nickname, Table for One, circulated in some circles. There were shovel jokes that masked, as humor often does, the seriousness of the underlying offense.

But then the Covid-19 virus washed across the lower 48 and Reed’s problems in a distant time and place seemed to drift into oblivion. The season resumed in May and golf fans had a new hobby: Bryson DeChambeau. The tournaments themselves had no fans. No fans meant virtually no live heckling. The week at Winged Foot came and went largely, if not entirely, without incident.

Reed’s golf has been less than inspired. But now he enters a run — Zozo, Houston, Augusta — that can remind you all over again other sides of who this guy is.

And with that phrase in mind — other sides of who this guy is — I thought it would be useful for you to hear from a Los Angeles dentist with whom I have corresponded for a while on various topics, Reed among them. My correspondent’s name is Ron Cherney. He’s been the club champ at El Caballero Country Club in Los Angeles, he’s 72 and his hobby is writing letters. A book he compiled, My Greatest Shot, is a collection of letters from famous golf personalities about great shots they have seen or played.

El Cab is one of the so-called Jewish clubs in L.A., clubs that were founded in a former century when Jews and people who worked in the entertainment business found they could not join some of the prominent Los Angeles clubs. There’s a quote from Bernie Shapiro, who founded the club, on the homepage of the El Cab website: “No person shall be denied the privilege of the club or employment by it because of his race, color, creed, gender or religious belief.”

I mention this bit of social history because there’s a certain we’ll-show-them outsider spirit to El Cab and clubs like it and certainly among its founder and some of its members. Earl Woods, by the way, not at all a country-club guy, had a lot of that we’ll-show-them energy, too. In my opinion, that attitude was the jet fuel that propelled Tiger’s amateur, and early professional, career. Reed is loaded with outsider spirit. I couldn’t offer an opinion on Dr. Cherney, a Canadian by birth who came to golf after laying down his college hockey stick after just one season. You don’t want a dentist who played too much hockey.

Anyway, Cherney, first by email and later in a phone conversation, told me about his brief and impressive interaction with Reed. This is how it goes: Shortly after the 2018 Ryder Cup, when the U.S. lost to Europe in Paris and Reed was less-than-gracious in defeat, Cherney went on Reed’s website and wrote him to tell him he was raising money for a cancer-research charity that was dear to him and that he thought might be meaningful to Reed. That was it. The dentist had no special path to Reed. He was just some rando writing in.

“Within a day or two, I heard back from Patrick, saying he’d be sending a check for $10,000,” Cherney told me. “He also sent me a signed Masters flag, which we auctioned off for charity. I wound up buying it, for $1,000. Patrick and his wife Justine had had a close friend who had died of cancer. He couldn’t have been kinder, more generous or more prompt.”

Since then, Cherney has had an email relationship with Justine and he texts now and again with Reed. They talked about getting together for dinner the week of the Genesis Open this year, but the only night that worked for Reed was Friday night, Feb. 14, “and Patrick said, ‘You don’t want to have dinner with me on Valentine’s Day.’”

Cherney said to me, “He shoots himself in the foot. He digs in and won’t open up. That situation in the Bahamas, it didn’t look good. It was a cuppy lie when he got in there and less of one after he took his stance. But I’ve seen other sides of this guy.”

I know what he means. Every time I’ve needed something from Reed, for a story, I have found him accommodating. I recall being behind Reed and his traveling party one year, flying back from the British Open, and there was an issue at the airport where one of his family members had too much perfume or something and every last thing had come out of all the carry-on bags. It took forever. Reed was a study in calm.

I love the way he plays and how inventive he is. I am also deeply troubled by what happened in that bunker. The starting point for all serious golf is unquestioned adherence to the rules. There is reason to think Reed’s situation there was not a one-off.

Writing about Reed, Cherney said, “Do I wish some of the things that happened to create his negative image were handled differently? Sure, but all of us are human and we all do things that we might do differently if given the chance. Patrick Reed is on a big stage. His actions are magnified. A public figure gets the slings and arrows on any misstep.

“In these divisive times, we need more understanding, forgiveness and goodwill toward others. Patrick Reed is more than a talented golfer with issues. He and Justine are human, with very big hearts.”

I don’t doubt that for a minute. I suspect Ron Cherney is, too.

The cancer-research group he mentions, by the way, is called the Tower Cancer Research Foundation. Check it out. Patrick Reed did.