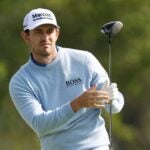 Patrick Cantlay's string of strong finishes make him a favorite among the GOLF staff at the Shiners Hospital for Children Open.

Betting on golf is hard. Really hard, it turns out. The GOLF.com staff has been making picks since June, and not a single person has hit on more than 40 percent of their bets.

Betting on golf can also be profitable. Just ask any of the five staffers who currently sit in the black for their picks over the last four months. In golf betting as in golf, the key is in making the right choice at the right time.

On Sunday, Sergio Garcia made the right choice at the right time. The 40-year-old flushed an 8-iron from 172 yards to three feet on the 72nd hole at the Sanderson Farms Championship, then tapped in for birdie for his first win on North American soil in three years. But it wasn’t the remarkable approach that should have taught you a lesson on picking players, it was the tap-in.

That Garcia closed his eyes as he tapped-in for birdie — part of his putting strategy, he claims — is a performative example of the fickle nature of golf picks. It doesn’t matter if we’re 70 feet from the cup or seven inches, we’re all putting with our eyes closed. We can choose to line up our putts from a bit closer (by picking favorites), or we can hope for the right line on a miracle.

But the most important element isn’t in where you’re putting from, it’s how you’re putting. Those with consistent strategy and technique stand the greatest chance from week-to-week. Those without it may hit a putt or two.

For this week’s Shriners Hospital for Children Open, the GOLF.com staff is once again putting with its eyes closed, placing three $100 bets (to-win, top 10 and a prop of their choice) on the field. Our primary goal, of course, is to help you with your own weekly picks, informing you of the strategy and technique to roll your putts with confidence.

In our league, the first-place finisher will play a round of golf when it’s all said and done (after the Masters in November), and the last-place finisher is on the bag for the winner. Here are our picks for the week in, of all places, Las Vegas.

To-win: Joel Dahmen, +14,000. Tied for ninth here last year. All of my picks this week are being made with an eye on winning this game. Let’s go!

Prop: Leader after Round 1, Tyler McCumber, +10,000. One of the hottest players over the past two weeks.

To-win: Jason Day (3,500). First start since the U.S. Open means he’s had exactly what his body needs: a few weeks to rest up. If he can just rediscover his mid-summer form, when he rang off four straight top-10s, he’ll be a serious threat in Vegas.

Top 10: Peter Malnati (+1,400) Oddsmakers fell asleep at the wheel with this line. After Malnati’s sterling play at the Sanderson, these odds are too good to pass up.

To-win: Patrick Cantlay, +1850. Last year in Vegas? 2nd. Year before? 2nd. Three years ago? He won. Don’t overthink this one — he’s 52 under par there the past three years combined.

To-win: Scottie Scheffler (+2500): His first start in a month after a positively scorching finish to the PGA Tour season, Scottie seems like he’s the right mix of slept-on and still hot to pull out a win this week.

Prop: Pat Perez, top-20 finish (+450): Doesn’t a weekend in Vegas seem like the perfect time for a Pat Perez sighting? I agree.

To-win: Tony Finau, +1850. I get the sense Bryson will be experimenting this week, which leaves the door ajar for another big bomber to get hot with the putter — and Finau’s the guy.

To-win: Patrick Cantlay (+1850) Cantlay’s results in Vegas for the last three years speak for themselves: T2, 2, win. Not going to bet against that run.

Top 10: Webb Simpson (+150) My top-10 king is back to the grind! Betting on Webb is pretty much the only reason I have any profit to speak of this season, and I’m not stopping any time soon!

Prop: Abraham Ancer Top 20 (+275) Full disclosure: I just did an interview with Ancer and he talked about how much he loves desert golf. He was T4 in Vegas back in 2018 and has played some awesome golf since then. A top 20 this week feels like a slam dunk.

Prop: Margin of victory, one shot or playoff (+200). This bet has hit the last three years in a row, why should this year be any different?

To-win: Scottie Scheffler (+2500) There’s a lot to like about Scheffler’s game. He’s been in the mix down the stretch a handful of times now in big tournaments, and the Shriner’s provides a good outlet for him to reach the winner’s circle.

To-win: Harris English. Plus 3000. Do we need any more evidence that English is back to playing great golf? We do not. But we will get it this week when he gets back in the winner’s circle for the first time in eons.

To-win: Patrick Cantlay (+1850), he finished second last year after losing in a playoff to an emotional Kevin Na. I can absolutely see Cantlay avenging that loss this week, and he has some nice value even as one of the favorites.

Top 10: Tony Finau (+250), I’ve been bleeding cash the last few weeks and I need a guarantee. Finau finished in the top 10 last year at the Shriners, and he’s been playing well of late including a top-10 finish at the U.S. Open.

Top 10: Matthew Wolff (+300): Last time I took the same player across the board, it blew up in my face. Might as well try it again.