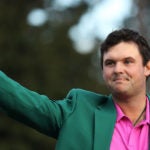 Patrick Reed is bracing for a chilly November in Augusta, Ga.

On a recent trip into the depths of the golf internet I stumbled across a brand-new interview with Patrick Reed.

When we last saw Reed he was among the hottest players on the PGA Tour; he nearly won the Tournament of Champions, finished T6 at Torrey Pines and won at WGC-Mexico. Reed’s not big on social media and has stayed away from the mini-tours and pro-ams where we’ve seen some Tour players reappear. But he popped up on something called “The Pros Show” with Jason Alexander, who is the head pro at Reed’s home club, Carlton Woods in Houston.

Alexander’s interview style is kind of parody-adjacent, but he still gets a few interesting answers from Reed, who appears more comfortable being interviewed by his buddy than he does at a typical Tour press conference. Alexander begins with a couple “hard-hitting questions,” including what the 2018 Masters champion thinks of this year’s Masters date, which has been rescheduled to November.

“It’s definitely going to play different,” Reed says, and he knows from experience. Reed played college golf at Augusta State — and he’s played Augusta in the fall, too. “It just plays really long,” he said. “You get to the par-5s; No. 2 you need two absolutely perfect golf shots to try and even get home. Thirteen is another one where instead of hitting iron you’re probably going to be hitting wood, so a lot of guys probably aren’t going to go for that.

“But I think the biggest thing is holes 11, 4, 10 — those holes are just going to be bears. So I would expect the scores to be a little higher.”

Reed’s comments about beefy holes square with what other Augusta fall visitors have said about the place. Fred Couples, the ’92 champ, described a November 2006 visit where he played the course twice — and hit 2-iron and 3-wood as his approach shots into No. 1, a par-4.

“I feel like there’s only two things that can happen: the weather can be okay, or it can be cold and wet and play really long,” he said.

“Especially with the system that they have at the golf course. They can suck the water out of the fairways now and with what they can do with the greens they can still get it playing firm and fast but it’s just going to be cold,” Reed said.

Reed will get back into action at next week’s Charles Schwab Challenge, and he added that he’s been trying to get in better shape for golf’s stretch run over the coming months. The Masters is scheduled for Nov. 12-15.

“I think the biggest thing was I felt like we’re going to have a sprint to the finish for the year, so I thought I needed to get in a little better shape,” Reed said. “For me it’s more about diet; I love food, I love to eat, so I just changed things up, I basically took as many carbs and sugars out as possible and for me once I figured out breakfast; it’s been pretty good.”

As for that breakfast? Here’s Reed’s solution:

“I basically just take three sausage links and put that in the bottom of a bowl, take two sunny side up eggs, put that on top of it and a full avocado, then mix it all in and it’s perfect. It gives me enough energy to get through the day and at the same time it tastes amazing.”

There you go — an Augusta scouting report and a breakfast recipe all in the span of a couple minutes. You can see Reed’s complete interview below.