Masters 2019: One year after his Masters victory, the joy is still missing for Patrick Reed

Patrick Reed returns to the Masters this year after a wild 12 months.
USA Today

It is hard to remember now how spectacular Patrick Reed’s Masters victory was. He came within three shots of the tournament scoring record while dusting more celebrated contemporaries Rory McIlroy, Jordan Spieth and Rickie Fowler. It should have been one of golf ’s most mythologized breakthroughs, the gritty triumph of a one-time Monday qualifier who had simply willed himself into a green jacket. But Reed was never going to get the fairy-tale treatment. He had already carved out his role as golf ’s antihero, and winning the Masters laid bare the dysfunction that has long surrounded him: Reed’s parents live in Augusta but, along with their daughter, were forced to watch the final round of the Masters on TV at home because of a long simmering estrangement. Reed won two national championships for Augusta State, but during last year’s Masters Sunday the crowd was never on his side. When he brushed in the winning putt the reaction from the knowing fans was so restrained as to be awkward.

I spoke with Reed’s family throughout Masters Sunday, and their pain was palpable. The ensuing story I wrote for GOLF.com became one of the most-read pieces in the website’s history. Plenty of fans — and a few players — were critical of the article, feeling it diminished what should have been a feel-good moment. But what gives athletic competition its heartbeat is the human element. Could we have written about the 2010 Masters without mentioning Amy Mickelson’s cancer? The ’95 Masters without touching on the death of Ben Crenshaw’s guiding light, Harvey Penick? Of course not. Why does the victorious hug between Tiger and Earl Woods define the 1997 Masters more than any single shot? Because golfers are not robots, and their personal journeys are what we cheer for, not birdies and bogeys.

Reed has made golf fandom much more complicated, since he — practically alone among the game’s media-savvy stars — often displays the uglier human emotions. Only a couple of weeks before the Masters, a phone-wielding citizen journalist had caught Reed bitching to a rules official who denied him a free drop: “Guess my name needs to be Jordan Spieth.” The pettiness and jealousy was particularly noteworthy because Spieth had long been Reed’s rah-rah partner at the Presidents and Ryder Cups. 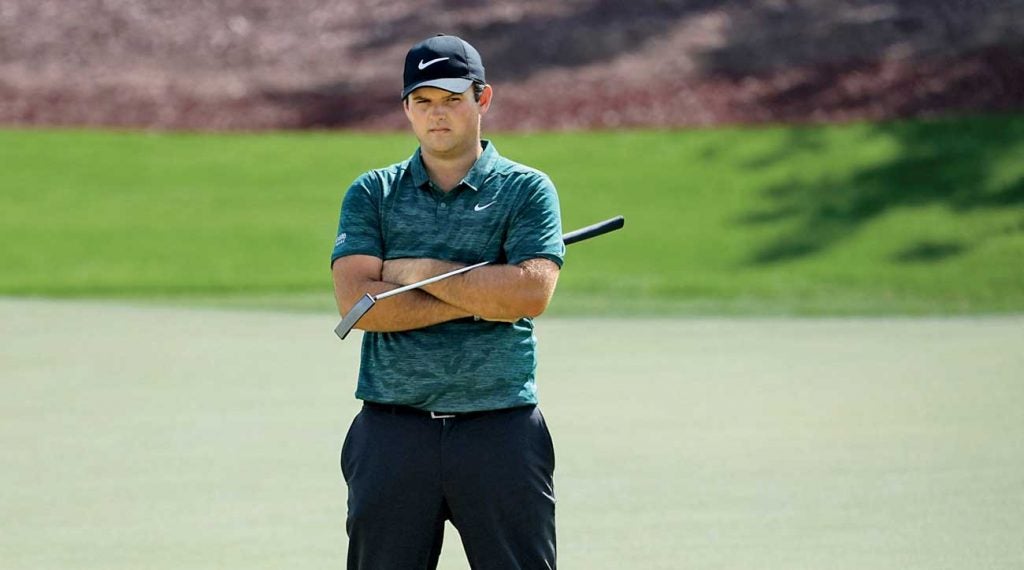 Patrick Reed has not won a tournament since claiming the Masters last April.
Getty Images

Two months after Augusta, at the U.S. Open, Reed had a chance to prove that he’s more than a Trevor Immelman or Charles Coody — that is, a good player for whom the Masters was the last notable event they ever won. Reed birdied five of the first seven holes during the final round, snaring a piece of the lead, but he shrank from the enormity of the opportunity, making three quick bogeys. The rest of the year was a struggle, calling to mind something Reed said at the British Open. Asked how he was feeling on the course, he said, “Oh, horrible. I’m not happy. I’m never really happy when I play, obviously. I always feel like there’s shots I leave out there.”

All this bad juju came home to roost at the Ryder Cup. This event more than any other has come to symbolize Reed and his contradictions. All the things that can drive his colleagues (and fans) batty — his ego and selfishness, his disregard for others — helped transform him into Captain America, a Ryder Cup folk hero. But dysfunctional people do not make good teammates in the long run. In addition to helping lose the Cup with his desultory play, Reed torched relationships with two important people who had long been among his few defenders: Spieth and Tiger Woods, his putative childhood hero. Reed had been presumed to be a foundational member of the American team for the next decade or more. Now, in one fortnight, he has become its biggest enigma.

So as Reed returns to Augusta it will hardly be a triumphant homecoming. Winning a green jacket is supposed to be the sport’s ultimate achievement, and yet somehow Reed’s place in the game has become shakier. It’s hard not to flash back to a scene from last year’s Masters. A clutch of Augusta National members were gathered around a TV, watching the tense closing holes, when Reed drained a crucial putt. The assembled green jackets sighed and exchanged woebegone looks. These members may not be thrilled about it, but Reed will be returning to the Masters as a past champion for the rest of his life.