Tony Finau incredibly hits a shot onto the green while slipping 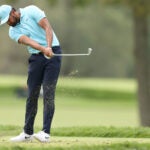 Tony Finau shot a 1-under 69 during Thursday’s first round of the U.S. Open at Winged Foot Golf Club and a 3-over 73 during Friday’s second round. He’ll be playing on the weekend. Finau can, quite demonstrably, hit golf shots with two feet on the ground.

He can hit the one-footers, too.

Finau hit his drive 262 yards down the right side of the fairway on the 422-yard, par-4 15th hole on Thursday. His ball sat 157 yards away from the hole and slightly above Finau’s feet. Or, at the end of his swing, foot.

His ball landed pin high to the left and took three bounces before slowly starting to roll back toward the hole. It ended up 5 feet away.

“Oh, he slipped there,” analyst David Feherty said during the broadcast. “His right foot just shot out behind him.”

And then, as the ball landed …

Finau would miss the par putt. On Friday, he knocked his approach even closer, to within about three feet, and made the birdie putt

He took both putts with two feet.

Rickie Fowler: Why Michael Jordan is so hard to beat at MJ's new course