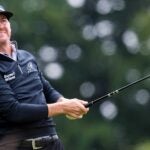 Jimmy Walker at the Scottish Open earlier this year.

HOUSTON — Six-time PGA Tour winner Jimmy Walker said he is not among the players who have been courted by the Saudi-backed group that is working to launch a new global golf tour, but, like many of his peers, that doesn’t mean Walker hasn’t given the rumored league any thought.

And in his mind, he said, the potential cons of defecting to a rival tour would outweigh any pros.

At 42, Walker is eight years from PGA Tour Champions eligibility, which he views as a security blanket of sorts. Most Champions events do not have cuts, which means entrants are assured of making a check.

“That’s guaranteed free money for me and my family,” Walker told GOLF.com at the Houston Open on Wednesday. “Why would I endanger that to go overseas constantly and play on a world tour? That just doesn’t make good business sense for me. It’s not a good business deal.”

Well, it could be a good deal. It’s unknown how or how much the would-be tour intends to compensate its players, but given its deep-pocketed backers at the Greg Norman-led LIV Golf Investments, payouts are presumed to be significant. It’s also unknown whether Walker or any other players could hypothetically bounce between the two tours. But, according to a Golf Channel report, PGA Tour commissioner Jay Monahan told players earlier this year that any defectors would “face immediate suspension and likely permanent expulsion from the Tour.”

That threat has not been lost on Walker.

“I haven’t been approached by Norman or anybody on this new tour and I don’t know anybody who has,” he said. “But the PGA Tour has said if you participate, you’re out. That’s pretty harsh, but it’s their Tour and if they say you’re out, then you’re out.”

Other players with the Champions tour in their sights, including 45-year-old Ryan Palmer, are taking more of a wait-and-see approach.

“What could they pay me over the next five years as opposed to what I could make on the Champions tour? The [PGA] Tour has said if you participate, you’re out, but could they enforce that? I don’t know, I’m not a lawyer.”

To date, no players have committed to the would-be league, at not least publicly, but high-profile appointments at LIV Golf have fueled speculation that the new tour will become a reality. Among those hires are two former PGA Tour executives, including the Tour’s ex-rules chief, Slugger White.

Both Palmer and Walker would seem to fit the mold of the type of player who might be interested in making guaranteed money via a short stint on a new tour. Both have impressive PGA Tour resumes — among Walker’s half-dozen wins is a major title, while Palmer has won four times — but both also are on the back nine of their professional careers. Palmer made nearly $2.3 million in the 2020-21 season, but Walker made “only” $661,287.

Palmer said he expects to learn more about Norman’s plans at Norman’s event, the QBE Shootout, which is Dec. 8-12, in Naples, Fla.

“I’m really interested to see what happens there, because you know [Norman] will be there and will be having some discussions,” Palmer said.

The biggest question: Will the tour come to fruition?