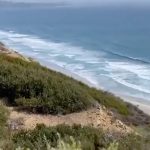 Black's Beach, as seen below Torrey Pines on Wednesday.

Ian Poulter took out his phone Wednesday and posted a peep to his Instagram account. He was playing a front-nine practice round at Torrey Pines ahead of this week’s U.S. Open, and he recorded himself and his caddie, James Walton.

Then he turned around his camera.

“That’s the nudist beach,” a voice shouts out from the background.

“Oh, is that the nudist beach?” Poulter said while walking along what appears to be the 4th hole. “Oh, that’s the nudist beach. We’re going to leave that video alone and get back to the golf.

“Just giving you a little look at what’s around.”

That is the nudist beach. Or as it’s locally known: Black’s Beach.

Set just below Torrey Pines — and visible in parts from holes 3, 4, 12 and 13 — Black’s is clothing optional. Sort of. Stripping down was outlawed by the city of San Diego in 1977. But, according to the New York Times, officials will look the other way, depending where you are along the sandy stretch.

The north end of Black’s, officially named Torrey Pines State Beach and directly below the golf course, is a state beach, where nudity is still illegal, but it’s not strongly enforced, according to the Times. In fact, Black’s Beach bareness is touted by the city’s website.

“Black’s is famous among surfers for big winter swells, however it is better known to the rest of the world as San Diego’s nude beach,” the Black’s entry on San Diego.org reads. “Although nudism is unlawful in San Diego, it has persisted at Black’s for decades with the only real deterrent being the hike to get there.”

Therein lies the rub. If you want to get frisky, you have to get risky. Because of the Torrey Pines bluffs, which lie between the golf course and the beach, Black’s is difficult to access.

But once there, bathers can enjoy the surf and sun as the 121st U.S. Open plays out above them.