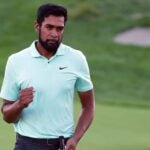 Tony Finau won The Northern Trust in a one-hole playoff against Cameron Smith.

The Northern Trust — after enduring Tropical Storm Henri — is scheduled to resume play and complete the final round of the first FedEx Cup Playoff event on Monday. Scroll down to find everything you need to know about the final round at Liberty National.

Refresh this page often for the latest updates from the final round of The Northern Trust. The newest items will be at the top.

— How to watch The Northern Trust
— Final round tee times
— What happens if play cannot be completed on Monday?

Finau gets it done, with an assist!

There’s nothing easy about winning a playoff on the PGA Tour. Tony Finau knows this quite well, as he lost one of the most exciting playoffs of the Tour season back in February at the Genesis Invitational to some magic from Max Homa.

On Monday, Finau made it into the playoff against Cam Smith and saw the exact opposite of Max Homa Magic. He saw Smith’s tee ball on the first playoff hole slice off out of play, just moments after his own ball split the fairway. “You don’t want to say it too quickly, but it’s essentially over,” Jim Nantz said on the broadcast.

It was. Finau made a solid, standard, two-putt par after hitting the green and Smith never had a say in it for the rest of the playoff. A second career victory for Finau after a string of 39 top 10 finishes without a win. “This is pretty cool to be standing here again, winning a golf tournament,” he said. Pretty cool indeed.

It feels like we’ve had nothing but playoffs here on the PGA Tour this summer. And it checks out recently. For the third-straight week, we’ll see a playoff, this time between Cameron Smith and Tony Finau.

Both players made great back nine charges when it seemed like Jon Rahm was going to run away with it. For Finau, it was a back-nine 30 for a final-round 65, and exactly the kind of round that Steve Stricker might prioritize when making his Ryder Cup captain’s picks next month.

For Smith, it was a back-nine 31 and an all-around solid day when he did everything well for 17 holes and exploded for a double bogey on the 5th. Besides that, Smith was nearly-perfect, making six birdies from the final group, finishing the event second in the field in Strokes Gained: Approach.

It’s become a bit of a three-horse race late at Liberty National as Tony Finau has charged into contention at 20 under, just one shot ahead of Jon Rahm and Cameron Smith, who are at 19 under. Just when it looked like Rahm might run away with it Finau sandwiched an eagle with two birdies to race up the leaderboard one group ahead of Rahm.

Few people make golf look as easily as Rahm can, but Finau might be one of them. The Utah native has struggled recently, with just two top 10s since March, but is rounding into good form ahead of the Ryder Cup captain’s picks season.

Smith shot just even par on the front nine Monday, leaking away his lead while Rahm charged ahead, but has bounced back with three birdies on the first seven holes of the back nine to force himself back into contention.

Young Hov’ began the day in contention at Liberty National, just three shots back of Jon Rahm and Cameron Smith, but after a quadruple-bogey 8 on the 5th hole, his time in contention was over. It didn’t help then when he left his 4th shot in a bunker on the par-5 8th, leading to a double bogey. On the 9th hole, he left his third shot short of the green and then got up and down for bogey to turn in 42. Even he would tell you the putter wasn’t the issue, but it was the putter that got punished.

The putter was put away for good after Hovland damaged it enough that it no longer held its original shape, leaving Hovland to putt with a wedge the rest of the day. He eventually made a 10-footer for birdie with that wedge on the 10th, but would miss a shortie on the 12th to even things out. He’ll have a new flatstick in tow next week at the BMW Championship.

Pat Perez said it a few weeks ago, but we’ll paraphrase it for now: If Jon Rahm stays healthy, it’s hard to imagine him ever dropping outside the top 10. He’s that good, that consistent, etc. Fast-forward to this week, he’s healthy and doing it again.

Rahm is up multiple strokes at The Northern Trust and in “autopilot off the tee,” according to CBS’ Dottie Pepper, who is among the few people on-site at Liberty National. Rahm hit six of seven fairways on the front nine and has turned in 34 while the rest of the field has battled soft, wet and windy conditions all day.

The No. 1 player in the world is leading the field in Strokes Gained: Tee to Green and has made just one bogey and one double bogey all week. With a multi-stroke lead and headed to the back nine, it’s clear that someone is going to have to go out and chase him. He’s not giving anything back to the field. “He gets in this kinda zone, look out,” Jim Nantz offered on the broadcast. It was the most simple and sufficient conclusion.

This was a Cameron Smith-focused live blog until the 5th hole at Liberty National, where he hit his tee shot into the water hazard left, dropped on one of the forward tee boxes, and then proceeded to hit his next approach shot flying over the green. He would make a double bogey and drop back of Jon Rahm, the man who is just always there.

Rahm’s last 12 months have been incredible. Two victories (with a heavy asterisk on his 54-hole WD at the Memorial, with a six-shot lead) and 15 top 10s since last year’s Northern Trust. That’s undeniably the best in the world. This week in New Jersey, Rahm is just doing what Rahm does. He shoots one great round, like his 1st round this week where he carded a 63, and then just hangs around the lead throughout. Give him four rounds and he’s going to post a great score. The man has only missed one cut in the last year, and when he has made the cut, he’s finished in the top 35 every single time.

Thus far Monday he has opened with five smooth pars and a birdie to take the solo lead at 17 under.

Cameron Smith is your new solo leader at The Northern Trust. The man with the best (or worst?) hair on Tour dropped a 40-foot bomb for birdie on the par-3 2nd hole to jump ahead of Jon Rahm and reach 17 under. Tony Finau is also making moves a few holes ahead, carding two birdies on his first four to reach 16 under.

At last, the leaders are back on the course at The Northern Trust. Jon Rahm, Cameron Smith and Erik van Rooyen struck their tee shots just after 1:40 p.m. local time and will duke it out on a soggy Liberty National looking to win the first FedEx Cup Playoff event of 2021. Rahm is seeking his second victory in a FedEx Cup playoff event, while Smith and van Rooyen seek their first.

The sun is shining in Jersey City and play is underway. After numerous delays, play finally resumed at 11:30 a.m. ET. The leaders will now tee off at 1:42 p.m. local time and, barring any more delays, should be able to finish by day’s end with the sun setting on Liberty National at 7:42 p.m.

The Tour announced play has been delayed once again. 11:30 a.m. is now the targeted start time.

The grounds crew is working furiously to get Liberty National ready. Seems they’ll need at least another hour…

Officials have elected to push back tee times by two hours after assessing the course conditions at Liberty National on Monday morning. Play was scheduled to begin at 7:30 a.m., but now players are slated to tee off at 9:30 a.m. at the earliest. Players will go off both tees and in threesomes and the final grouping of Jon Rahm, Cameron Smith and Erik van Rooyen will start at 11:42 a.m. off the 1st tee.