What happened after Patrick Reed left Torrey Pines on Saturday 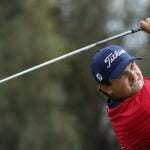 Patrick Reed hits his tee shot on the 12th hole on Sunday on the South Course at Torrey Pines.

The “boys” were talking.

“Obviously the talk amongst the boys isn’t great, I guess,” said one of Patrick Reed’s fellow pros, Xander Schauffele.

“It’s tough to see, it’s sad, kind of pisses us off, but it’s the way it is,” said another one of Reed’s fellow pros, Lanto Griffin.

The boys, and the girls, and the women, and the men were talking, too. If you had typed in only “Pat” into the search bar on Twitter on Sunday night, “Patrick Reed” popped up, followed by “Patrick Reed cheat.” There isn’t enough space on an internet site to publish every comment.

Reed won the Farmers Insurance Open on Sunday by five shots. His 68 was three strokes from the best score of the day. On a Torrey Pines South Course that will host the U.S. Open in June.

He didn’t just take his finger to his lips to shush the noise. He took his entire bag of clubs.

“I think the basic thing is you have to have resilience, especially when you’re out here, because golf’s hard as it is, and you come to a place like this where it’s so demanding not just off the tees,” Reed said after his round. “It doesn’t matter if it’s a drive, an iron shot, a wedge shot, putt, you have to be all locked in 24/7.

“I think that’s the biggest thing is when you play a U.S. Open-type golf course, where you play a place that’s as long as this is, you have to have resilience. You look at all the great players throughout times, all of them are really resilient. It doesn’t really matter what’s going on around them, what’s going on on the golf course, whether they’re getting good breaks or bad breaks, they seem to really figure out a way to get the job done, to really just drive in and to keep on improving each shot each day. That’s golf, that’s what you’re supposed to do.”

“What you’re supposed to do” is, in a way, how this all started. On Saturday, on the par-4 10th hole, Reed hooked his second shot, and his ball bounced once before settling into the rough left and short of the green. Reed, however, said neither he, nor the hole volunteer, his two playing partners and the grouping’s three caddies saw a bounce, and at that point, he lifted the ball to check whether it was embedded. He determined it was, Brad Fabel, a PGA Tour senior tournament official, confirmed it, and Reed took his relief and went on to par the hole.

Reed was told by the senior tournament director that “what just transpired was textbook.” Others, to put it nicely, read it differently. For his part, Reed said after he left Torrey, his Saturday night “was a normal night for me.”

“At the end of the day, once I sat there and after everything — after I called the rules official and everything on the 10th and then once they confirmed up in scoring after the round that I went through the right protocols to do what I was supposed to, at that point, everything was put to bed,” said Reed, whose verified Twitter account also tweeted in his defense on Saturday night. “It was what we were supposed to do and they said we did it correctly.

“So for me, it was kind of another night to kind of get ready and just kind of, you know, rejuvenate myself to get ready for Sunday. It’s a long week, especially with how the weather’s been early on in the week, and on top of that, you want to make sure that you’re fresh coming in on the final round and kind of really just stay focused and work on the things that we were building all week.”

In his first victory since he started working with swing coach David Ledbetter last September, and his first win overall since last February, Reed eagled the par-5 6th, birdied the 7th and 9th and closed with a birdie on 18 for his four-under 68. It’s his ninth win on the PGA Tour.

Still, the comments will, no doubt, continue. Reed is as much associated with controversy as he is with the clubs in his bag. And what would he say to those who are criticizing him for what happened on Saturday? Something similar to what he said on Sunday over 18 holes at Torrey.

“I’ve already said anything I need to say about what happened yesterday,” he said. “All I can really do is focus on today.”