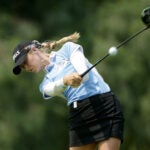 Nelly Korda tees off during the final round of the ANA Inspiration on Sunday.

Two days later, the wild finish at the ANA Inspiration continues to inspire debate, recriminations, and more than a touch of wonderment. Here are a half dozen lingering observations about an unforgettable tournament.

1. Above all else, Mirim Lee needs to be celebrated for her Seve-esque heroics. The 29 year old chipped in twice on the final three holes to win a major championship, including an almost-impossible eagle effort on the 72nd hole. Are you kidding me? They should be still be singing songs about her in the taverns of Rancho Mirage. Alas…

2. The big, blue wall behind the 18th green continues to dominate conversation. Justin Thomas stirred the pot on Monday when he tweeted of the offending billboard, “Cost @NellyKorda a major! Such a bad setup on the last hole of a major.”

2a. It’s cool that a top male player is weighing in on the women’s game.

2b. Nelly Korda cost Nelly Korda a major championship. Tall, telegenic, possessing a famous last name and the most aesthetically pleasing swing this side of Fred Couples, the 23-year-old Korda stepped to the 15th tee with a two-stroke lead and a chance to ascend to superduper-stardom. But she played prevent defense while Lee and Brooke Henderson kept attacking. Even with Lee’s spectacular closing barrage, and Henderson’s gritty birdies on the 16 and 18, Korda could have iced the championship with a birdie on the all-too-easy par-5 18th hole. But she hooked her ball into the gnarly rough, robbing herself of a chance to go for a green with the most garish backstop in golf history. After laying up Korda hit a timid wedge that doomed her to a par in the playoff. She played the hole the exact same way during the playoff, losing to a textbook birdie by the fearless Lee.

3. Plenty of folks have contended that, without the wall, Lee would not have made her eagle and Henderson might not have birdied the 72nd hole and thus in this parallel universe Korda’s closing par still would have been good enough to win. Alas, we’ll never know. But to besmirch how Lee and Henderson played the hole misses the point. The golfer’s job is to master the course as it is presented. Playing long and left on 18 and taking the free drop was the smart play and both executed adroitly. Korda, because of her wild driving under pressure, denied herself this opportunity. The setup folks and business managers at the LPGA are fair game for criticism, because they are responsible for the wall. Lee and Henderson should be applauded for their smart play, not condemned for something over which they had no agency.

4. The jury is still out as to whether Henderson’s hyper-aggressive play will work in the majors. Tied for the lead with Korda playing the par-5 9th hole, Henderson drove into the rough but still tried to get home by taking a hellacious rip with a 3-wood. It came out squirrely and bounded into the right rough, leaving her no chance to get close to a tucked pin. Korda, meanwhile, was in the fairway but elected to lay up to her favorite number and then stuffed a full-swing wedge. Tie ballgame. Henderson had reclaimed the lead by the 13th hole, where her drive skittered one yard into the tangly rough. She tried another ambitious shot but again put herself on the short-side to a flag hidden behind a gaping bunker. Henderson compounded the error by trying to get too cute with the ensuing pitch, dumping it in the bunker and from there making a ghastly double bogey to lose the lead. You gotta love this young woman’s moxie, and her bomb-and-gouge style has carried her to nine LPGA wins, but on more exacting major championship setups eliminating errors is crucial and Henderson is still making too many costly mistakes.

5. Still, let’s take a moment to appreciate Henderson’s incredibly athletic action, which features a cartoonishly long backswing but the grace of a ballerina. “I don’t know how she does it,” Brittany Lincicome said following the third round. “I was watching her hit a driver out there and how the heck does the club get all the way back there but somehow wind up all the way over here? It blows my mind.”

6. The wacky finish obscured the most cold-blooded shot of the tournament. After Henderson’s double bogey, Korda stepped to the tee of the watery par-3 14th hole. She stared down a dangerous pin cut only a couple of steps beyond the lily pads and then produced yet another in a series of gorgeous, syrupy swings. But don’t let her languid action fool you – there was malice in Korda’s heart. She stuffed the shot to four feet, and behind the green her sister Jessica shouted a one word verdict: “Siiiick!” If Nelly had eked out the victory it would have been a defining moment in her young career. On Sunday, before the denouement, plenty of colleagues were openly rooting for Korda to bring home the victory. “It would be massive for women’s golf,” said Cristie Kerr. “She’s such a talent, and she has that star quality. She’s a total, all-around player. You watch her hit the ball, it’s just beautiful and graceful. She’s got that perfect golfer’s build like Beth Daniel, and she’s got the short game and putting and tenacity. She’s great for the game.”

A player usually has to lose a major championship before she can win one. “She going to win one soon, we all know that,” says Brittany Lang. “She’s probably going to win two or three.” Here’s hoping, because then this ANA Inspiration will be remembered not just for the finish but also as the beginning of something special.