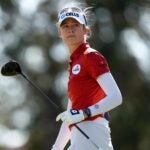 Nelly Korda last appeared in competition at the LPGA Drive On Championship in February.

World No. 2 Nelly Korda will not play in the first major of the LPGA season at next week’s Chevron Championship after missing the Tuesday night deadline to commit to the tournament.

Korda is recovering from a blood clot doctors discovered almost two weeks ago after she noticed swelling in her arm while partaking in “a photoshoot and commercial appearance” in Florida. She went to the hospital as a precaution where doctors gave her the diagnosis.

“I am currently at home getting treatment to eliminate further risks. I will communicate my status as and when and there is more information,” Korda wrote in a social media post on March 13 announcing her condition. “I hope to be back soon! Thank you.”

Korda rose to No. 1 in the world ranking after a dominant season in 2021. The 23-year-old star captured four wins to increase her career total from three to seven, while taking home the gold medal at the Tokyo Olympics. Most importantly, she finally broke through for her first major championship victory at the Women’s PGA Championship in June at historic Atlanta Athletic Club.

The win followed several close calls in majors, including at the Chevron (then known as the ANA Inspiration) where she finished T3 in 2021 and T2 in 2020. This is the final year the tournament will be played at the Dinah Shore Tournament Course at Mission Hills Country Club in Rancho Mirage, Calif.

Korda will also miss this week’s JTBC Classic which she had initially intended to play. Her last appearance on the LPGA was a T15 finish at the LPGA Drive On Championship in February.