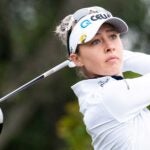 Nelly Korda, after feeling swelling in her arm on Friday, says she has a blood clot.

In a statement on her social media channels on Sunday afternoon, the second-ranked golfer in the world said she was told to go to the emergency room after alerting her doctor. Korda said she is now recovering at home.

“On Friday I was in Ponte Vedra Beach, FL for a photoshoot and a commercial appearance,” her post said. “After a typical morning workout, my arm started to feel like it was swelling. At the advice of my doctor, I went to the Emergency Room as a precaution. I was diagnosed with a blood clot.

“I am currently at home getting treatment to eliminate further risks. I will communicate my status as and when and there is more information. In the meantime, I want to thank everyone for their support and ask for privacy for all our family during this time. I hope to be back soon! Thank you. [Prayer emoji.]”

No other information was given. As of Sunday afternoon, the LPGA Tour had not released a statement of their own.

Korda has played in three events this year, finishing tied for fourth at the season-opening Tournament of Champions in January, tied for 20th at the Gainbridge LPGA a week later, and tied for 15th at the LPGA Drive On Championship at the start of February. The LPGA Tour’s next event is the JTBC Classic at the end of the month, and the season’s first major, the Chevron Championship, is the week after that.