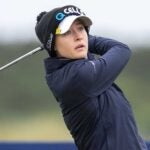 Nelly Korda fired a 67 in the opening round at Carnoustie.

Stop us if you’ve heard this one before — Nelly Korda is in the lead at a major championship. This time, it’s the AIG Women’s Open, and she’s joined by Madelene Sagstrom and Sei Young Kim.

The trio of leaders shot five-under 67s on the first day at Carnoustie Golf Links, taking advantage of relatively benign conditions to hold a one-stroke lead after 18 holes.

“You never know at British what kind of weather you’re going to get,” Korda said. “So if you take advantage of these days and score lower, then I think it’s a good stepping stone to the next few days.”

The World No. 1 is looking to become the first woman to win multiple majors in the same year since Jin Young Ko in 2019, and the first American to do it since Juli Inkster in 1999. The 23-year-old carded eight birdies in her first start since winning the gold medal at the Olympics two weeks ago.

“I’m just going on like a little girl playing golf,” she said with a laugh. “Enjoying myself in this cold weather.”

Kim, the 2020 KPMG Women’s PGA champion, also enjoyed a strong day on the links. She played bogey-free golf through 14 holes before going one over on her final four to post five under. Her best finish in the Women’s Open is a T4 performance in 2018.

Sagstrom, meanwhile, carded seven birdies to join the leaders at five under, and, if not for a bogey on No. 18, would have held the solo lead heading into Round 2.

“I putted really, really well,” Sagstrom said. “I think that was kind of what saved me. I made some really long putts today, and I knew that, if I could just get on the green, I have a chance for birdie or a chance to save my par.”

The 28-year-old Swede is playing alongside European Solheim Cup captain Catriona Matthew for the first two rounds, providing an excellent opportunity to make a good impression before teams are announced after this week.

“I’m just trying to play as well as I can to give myself a chance for that team,” Sagstrom said. “I haven’t put too much pressure on myself this time.”

One shot back at four under are major winners Yuka Saso and Georgia Hall, as well as Andrea Lee and amateur Louise Duncan.

Defending champion Sophia Popov fired an even-par opening round and sits five shots behind the leaders.