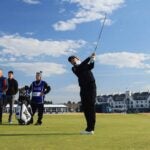 Lydia Ko has a links-golf game plan for this week's AIG Women's Open.

The stars of the LPGA Tour are duking it out in the final major championship of the year this week at the 2021 AIG Women’s Open, with treacherous Carnoustie Golf Links as their stage.

The historic course is one of the world’s best examples of links golf — the hard, fast, rolling and often tree-less seaside courses that dot Scotland’s windswept coasts.

The Women’s Open is one of the only occasions each year when LPGA players have to contend with links-style golf, and it presents a very different challenge than what they’re used to seeing on Tour in the U.S. and Asia.

With major championship hardware on the line, every player in the field is trying to unlock the secret to mastering links golf — or at least, unlock it well enough to hoist the trophy Sunday night. And as it turns out, the secret might well be simpler than it appears.

“I’ve been trying to keep it very, very simple and, I have over-complicated things a little bit for myself these last few weeks trying to be that perfect ball-striker that I think I can be, but it’s just not necessary around here,” said Sophia Popov, last year’s surprise Women’s Open champion.

World No. 6 Lydia Ko, fresh of an Olympic bronze medal, echoed a similar mentality for the week. She’s focusing on “keeping it simple” and just “making sure that when I’m out there playing, I’m playing with freedom.”

Patty Tavatanakit held off Ko to win her first major at the 2021 ANA Inspiration in April, and her game plan doesn’t differ far from Ko’s. She’s taking some lessons from her first appearance in the Women’s Open last year, where she missed the cut, in the hopes of getting a better result at Carnoustie.

“It was definitely different golf. I feel like I was trying to be perfect too much, and you know, you can’t really be like that on links course,” Tavatanakit said early in the week. “You’ve just got to be yourself and just embrace all chances and play, play like you own the course. Be brave and just no fear, and just play.”

But just “keeping it simple” won’t win the Open. With links golf, you have to play a certain way to give yourself the best chance, and these players have their specific strategic tactics dialed in as well, as Tavatanakit illuminated in her presser.

“I didn’t do so well last year and I told my coach, I want to be better hitting these shots and be better around the green,” she said on changes she’s making from last year’s event. “I developed a lot in terms of working my game to fit in the course conditions to play in the wind and to control my flight.”

“I feel like it’s a ball-striking course,” Tavatanakit continued. “If you get your ball around the green, just keep hitting fairways and greens, you’re going to be in a good position. Mainly control my trajectory, you know, which shots I feel like you can move it left or right with the right trajectories and at appropriate amounts of spin rates and stuff.”

Inbee Park, who counts the 2015 Women’s Open among her seven major titles, is primarily factoring in the wind and the firm conditions.

“Obviously you need to control your ball really well, under the wind and you have to avoid a lot of the bunkers,” she said. “It is always tough playing under the wind but I somehow manage to enjoy the wind and links golf course. This is what we’re supposed to get playing links golf. It’s just that kind of mindset, and obviously the ground is very firm because it’s a links golf course, and the ball is running. So the course is not playing overly long. I’m not the longest hitter, so I think that really helps as well.”

The final key, repeated by several players in the lead-up to the tournament, is a less complicated one. Instead of letting the stress and the difficulty of the course get to you —which can compound your mistakes — remember to let loose. It’s a major, yes, but it’s also a week on one of the most famous courses on earth — those don’t come around very often.

“I’m just going to enjoy it and not get too stressed or too worried about the results because those things I can’t control,” Ko said. “Just do a good job of the things that I can control and be committed and trust; have trust when I’m out playing.”