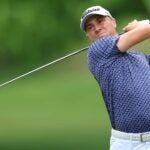 Justin Thomas will start Sunday at the PGA Championship seven back to leader Mito Pereira, but is he already too far out of it?

Three rounds are in the books at the 2022 PGA Championship, and if you had Mito Pereira in your office pool, we hope you bought a Powerball ticket, too. Few pundits put the 27-year-old Chilean on their lists of pre-tournament favorites. But now here he sits, the 100th-ranked player in the world, first on the leaderboard heading into Sunday at Southern Hills.

Pereira’s strong showing, on a moving day when many bigger names moved in the wrong direction, was further proof that you never know what golf is going to give you. Anything can happen, and a lot of things still could. With a tightly bunched group of players still in the mix, let’s get to the hypotheticals. Here are eight of the best ways this year’s PGA Championship could end.

A seven-time winner in Europe, Fitzpatrick has yet to break the ice on the PGA Tour. Which is not to say he hasn’t shined on U.S. soil. In 2013, the Englishman won the U.S. Amateur at The Country Club, in Brookline, which happens to be hosting next month’s U.S. Open. A win at Southern Hills would give Fitzpatrick a chance of going back-to-back in majors, on a venue where he’s come up big before.

7. Will Zalatoris and Cameron Young Go to a Playoff

Two of the finest young ball-strikers on the PGA Tour played collegiately at Wake Forest, a school with a Hall-of-Fame roster of alumni, topped by Arnold Palmer. Young already has three runner-ups this year, his rookie season. Zalatoris, the Tour’s 2021 Rookie of the Year, has four top 10s in his seven major appearances. Neither has a victory yet on Tour. If these Demon Deacons were to meet in a playoff, something would have to give. Either way, Arnie would be proud.

Not since 1958, when the PGA Championship switched from match-play to stroke-play, has a golfer who made the cut on the number gone on to win the event. Following a five-under third-round 65, Simpson, who slipped into the weekend by the skin of his teeth, sits in a tie for 10th heading into Sunday, eight shots behind Pereira. He’ll need a scorching round and some slip-ups from other, but it’s not out of the question. Making history makes great TV.

In the modern age of brutes and bombers, the 5-foot-7 Ancer is never going to overpower his competition. He draws on something deeper to keep up. On Saturday, he did that and more, bettering his playing partner, Rory McIlroy, by four shots in a study-in-contrast pairing that showcased the grit and beauty of Ancer’s game. A win for Ancer would give fans an easy-to-root for, relatable champ, along with a reminder that even in an era that prioritizes distance, the little guys can still get it done.

No player from Chile has ever won a major. But it’s starting to feel like just a matter of time. In the same season when his buddy Joaquin Niemann became the first Chilean to capture a PGA Tour title, at the Genesis Open at Riviera, Pereira has a chance to chalk up an even brighter victory for his country, in what would also be yet another celebration of golf’s global reach. Want to grow the game in emerging markets? There’s no better way than by giving fans a champ they can call their own.

Thomas is not the best player to never win a major. But he might be the best one without a second. Given the difficulty of the conditions, along with his gift for shaping shots in the wind, JT has a chance to shed that label, too.

Which McIlroy will show up on Sunday: the world-beater with a bounce in his step who posted a sizzling first-round 65 to claim the lead, or the slump-shouldered golfer who has since slipped into a tie for 17th? The latter would put a charge into the crowd and give McIlroy a chance of bagging his fifth major, and his first since the 2014 PGA Championship.

1. Stewart Cink Wins One for the Ages

Last year, Phil Mickelson, at age 50, became the oldest man to ever win a major. And while he’s not around this week to defend his title, Cink, 49, could make it back-to-back PGA Championships for graybeards, while becoming the second oldest on that Centrum Silver list. And for Cink, it would be on the same course where he let the 2001 U.S. Open slip away in heartbreaking fashion.