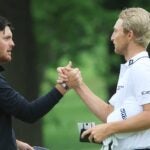 Mito Pereira, left, and Will Zalatoris during the third round of the 2022 PGA Championship.

Mito Pereira of Chile has the 54-hole lead at the 104th PGA Championship. At nine under, he’s three clear of two other players looking for their major titles: Matt Fitzpatrick and Will Zalatoris. Only three other players are within six of the lead: Cameron Young (-5), Abraham Ancer (-4) and Seamus Power (-3), while a trio of major winners lurk at two under (Justin Thomas, Bubba Watson and Stewart Cink). Who wins on Sunday?

Zephyr Melton, assistant editor: Guillermo “Mito” Pereira. His ball striking has always been a strong suit, and he’s putting on a clinic at Southern Hills. There was a little hiccup midway through his Round 3, but three birdies coming home steadied the ship and gave Pereira a three-shot lead. Chile gets its first major winner on Sunday.

Jessica Marksbury, senior editor: I haven’t seen enough of Pereira’s play under pressure, so I’m going with Matt Fitzpatrick. He has the experience and the pedigree, with seven wins on the DP World Tour. Simply put, he’s been a very good player for a long time. Not only that, but he’s also quietly put together three consistently excellent rounds under par, in tough conditions. I think it’s his time.

Alan Bastable, executive editor: Pardon my laziness (hey, it’s Saturday night!), but just going to go ahead and cut-and-paste my sleeper pick from our staff picks column earlier this week: “Cameron Young isn’t playing like a ‘sleeper’ with a T2 and T3 in his past two starts — and on two very different golf courses (TPC Potomac and Harbour Town). But he is a player with whom casual fans are still not familiar. He will win a major, and likely soon. Crazy talent. No real weaknesses. Also, the smartest picker I know has been crowing about Young for months.” For all these reasons and more (love his composure), Young is my guy on Sunday.

Dylan Dethier, senior writer: Mito! He was already playing under his toughest-ever circumstances on Saturday and came out hot — plus he rebounded well. He seems well-equipped to start with a lead and hang on tight.

Josh Berhow, managing editor: Cameron Young is the best player a ton of golf fans have never heard of. But he’s had a great year, and I’m not confident enough in the other contenders’ ability to go win this thing.

James Colgan, assistant editor: Man, not a ton of major championship experience at the top of this leaderboard, huh? It’s a dart throw, and of the options in contention, I like Zalatoris to get the job done. Had a furious final round at the Masters a year ago and already has a handful of major top-10s. Sunday, he’s primed for a breakthrough.

Josh Sens, senior writer: Before the tournament, a fine amateur player who has caddied for some of the best told me to take Mito Pereira, saying that the guy was playing great and would not shrink from the moment. I ignored that advice and picked Patrick Cantlay. Call me late to the game. And gimme Mito tomorrow. I’m a repentant convert.