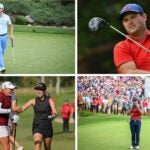 What's next for the U.S. Ryder Cup team?

Welcome to the Monday Finish, where we don’t putt like Patrick Cantlay…yet. Let’s get to it.

I watched Sunday’s epic playoff across a medley of media, as I was returning from a wedding in Chicago to home in Seattle. So I did some streaming (shoutout YouTube TV) some ShotLink (when the stream went down) and some refreshing of Twitter (for snarky analysis of the ShotLink data). It was enthralling, and not just because streaming live television on a plane still feels like literal magic. But two things stuck with me from the BMW’s incredible finish.

(Heads up: For a breakdown of all this week’s action, listen to this week’s Drop Zone here or on Apple Podcasts!)

First, this felt like a turning point for Patrick Cantlay in the public eye. Fans have dinged Cantlay in the past for his glacial pre-shot routine and his dour disposition on course. But on Sunday he served as perfect foil to Bryson DeChambeau; in contrast to the bomb-and-gouge Long Drive star, Cantlay’s plod-and-putt style gained a certain panache. Plus, when Cantlay makes putts he does this little shuffle-slide thing towards the hole just as the ball is about to drop. It’s about the most expressive he gets, but it’s cool and subtle. When you’re making a boatload of 20-foot putts, cool and subtle gets far cooler.

Second, this seems like another test for DeChambeau’s public image as well as his self-image. Thinking rationally, this should be a week DeChambeau’s game is celebrated. The man shot 12 under in one round and 27 under for the tournament. He drove it better than anyone and, if you could just vaporize Cantlay, DeChambeau putted it better than anyone, too, and beat the field by at least four shots.

But because of the way things finished, the anti-Bryson army will come away with plenty of fodder. For telling Cantlay to stop walking as he hit his approach at No. 14. For missing short birdie putts, both for 59 (on Friday) and to seal the deal on Sunday (on the second playoff hole). For turning down the media and for a tense exchange with a fan, reported by ESPN’s Kevin van Valkenberg, that suggested his frustration at “Brooksy” heckling has reached a boiling point. DeChambeau played spectacular golf this week. I’m curious if he sees it that way.

Patrick Cantlay‘s BMW victory catapulted him to No. 4 in the world, leapfrogging Tony Finau, Louis Oosthuizen, Bryson DeChambeau, Justin Thomas and frequent sparring partner Xander Schauffele. It’s the highest ranking of his career and also opens the door to his Player of the Year candidacy.

It looked like Bernd Wiesberger was going to win the Omega European Masters when he stepped onto the 72nd tee but he found a fairway bunker and then the water and walked off with a double-bogey 6. As a result 20-year-old Rasmus Hojgaard‘s final-round 63 was handsomely rewarded as he claimed the third European Tour title of his young career.

On the Ladies European Tour, Pauline Roussin-Bouchard earned her first professional title in just her second professional start at the Didriksons Skafto Open. Her tournament was highlighted by a 60 on Saturday which featured a back-nine six-under 26 (eight 3s and a 2) on the par-69 layout. Buying all the stock we can.

And Trish Johnson took home the Senior LPGA title at French Lick. The Englishwoman also won the event in 2017 and finished off a final-round 69 to edge Welsh pro Becky Morgan by a single shot.

So close, and yet…

Nobody has ever shot 27 under par for four rounds on the PGA Tour and lost…until now. Sorry, Mr. DeChambeau.

Rory McIlroy‘s fourth-place finish seemed like a step in the right direction, as did Sungjae Im‘s solo third, his best result since a T2 at the 2020 Masters.

In Europe Henrik Stenson logged his second consecutive top-four finish, causing faint rumblings about a longshot Ryder Cup pick. But in reality the Swede only moved to No. 49 in Europe’s rankings, which means he’d still have plenty of work to do to get Captain Harrington’s attention. Speaking of which…

K.H. Lee bogeyed 18 to claim the unfortunate position of No. 31 in the FedEx Cup standings, leaving him one precious shot shy of East Lake. Charley Hoffman also came tantalizingly close and finished No. 32. Alex Noren‘s BMW rally left him at No. 33, Si Woo Kim finished No. 34 and Max Homa fell from the edge of the bubble (No. 30 to begin the week) to No. 35.

There’s no concern for the long-term career prospects of those BMW participants who didn’t crack the top 30, but there was plenty of intrigue anyway. The coveted top 30 earn a bonus paycheck, a chance at another massive paycheck and exemptions into nearly everything, including the Masters. It’s also a final chance to prove strong form in advance of the Ryder Cup, but hopefuls like Kevin Kisner (No. 38) Webb Simpson (No. 40) and Phil Mickelson (No. 70) won’t have that option.

As for who’s in? Well, there’s Stewart Cink, making his first appearance since 2009 on the strength of a two-win season. There’s Dustin Johnson, making his record 13th consecutive appearance. There’s the duo of Erik van Rooyen and Sergio Garcia, who leapt from 45th and 44th to 27th and 28th, respectively, after top-10s at the BMW.

Then there’s the final spot, No. 30, which goes to Patrick Reed. More on that in a moment…in the meantime, here are the starting scores for next week’s Grand Prix.

On the U.S. side, we now have a very clear picture of the likely Ryder Cup team. Five automatic spots were locked up entering the week, belonging to:

It came down to the wire as to who’d earn the final automatic spot between last week’s winner and this week’s winner, but there was no doubt they’d both be on the team regardless:

Two more golfers — No. 8 and No. 9 in the rankings — were guaranteed locks regardless of their middling finishes at the BMW.

Now, with nine players locked in, is where things start to get interesting. And the 10th-ranked player is the biggest mystery of all. Patrick Reed is now ranked No. 30 in the FedEx Cup, which means he’s into East Lake. But he was also in a hospital bed as recently as last week with double pneumonia, which means playing competitive golf this week would seem out of the question.

That remains the biggest mystery of this U.S. Team. Reed is THE story. He was the story leaving the Ryder Cup in Paris, when he lined the team room with kerosene and lit a match on his way out. He was the story before, during and after Royal Melbourne, when shoveling and shoving from within Team Reed took over the Presidents Cup. Determining his physical health post-pneumonia is slightly outside my area of expertise, but when it comes to Reed and U.S. team golf, we shouldn’t so quickly discount anything. In other words — if Reed is healthy enough to suit up play, will Captain Stricker leave Captain America at home?

Harris English isn’t a brand-name Ryder Cupper, but he has kept up his strong play and has proven he can do it on the big stage with two top-four U.S. Open finishes in the last 12 months. I think he’s in.

Daniel Berger, No. 12 in the ranking, continues to fly under the radar but seems like a fitting final pick. He’ll be jockeying with Nos. 13 and 14, Webb Simpson and Scottie Scheffler — and I think, as of now, that’s it. Kevin Kisner and Phil Mickelson ended their seasons by tying for last at the BMW, so they’re out as X-Factor picks. But something could definitely still change this week when Jason Kokrak rallies from two under to win $15 million and that 12th spot.

In other words, the most likely scenario to me still seems the least interesting of all: Complete chalk, top-to-bottom, 1-12 in the Ryder Cup rankings. I’m curious to see how I’ll be wrong.

En route back to Seattle I got upgraded to first class (which happens occasionally because I fly quite a bit for this job) and was served the greatest airplane snack of all time, the Chocolate Chip Cookie “Pie in the Sky” made by Eli’s Cheesecake.

Our nation’s eyes now turn to another Monday Finish when the best American and European female golfers show down in Ohio this coming weekend. I’ve got Team USA by a healthy margin, buoyed by a strong showing from team rookie Yealimi Noh.

A whole truckload of money is up for grabs, and I’m weirdly coming around on the Tour Championship’s format. Yes, it’s awkward and imperfect. No doubt. But at least we’ll end the week with a dramatic conclusion…

He’s golf’s must-watch figure at the moment. What will we see this week?