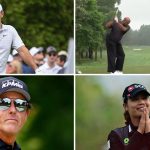 It was another dynamic week across the golf world.

Welcome to the Monday Finish! This is where we’ll tally the scores for the week that was and tee you up for the week to come. Usually I like to take it pretty deep on a few different topics, but I in fact am playing U.S. Open qualifying on Monday morning so this week we’ll do a speed round instead. Let’s get to it!

Before this week, you might have struggled for a connection between Phil Mickelson, Rory McIlroy, Quail Hollow and bowel movements.

Long story short (literally, in this case — I wrote a book about it) I ended up caddying in Mickelson’s group in the pro-am at Quail Hollow in 2010. This was indescribably exciting; I’d never imagined that I’d fall into such good fortune as to be inside the ropes at a PGA Tour event.

I was blown away by Mickelson’s sheer celebrity; imagine people doing “the wave” literally everywhere you walked on property. At a golf course, that’s the star power Lefty brings. It was electric.

But Mickelson wasn’t feeling quite right. By the fourth tee he was slumped over on a water cooler. There was some muttering of “exploding.” After a heroic birdie at No. 5 (a par-5 at the time), Mickelson retreated to a nearby restroom; that was the last time we saw him.

What happens when you’re in a pro-am that suddenly has no pro? We were suddenly stuck in tournament limbo. Mickelson’s caddie Bones Mackay, who I’m legally required to say is a fine player in his own right, suggested for a moment that he could play in his boss’s place. But then he vanished, too.

As we waited by the sixth tee, chatting with volunteers and tournament organizers, trying to figure out if a replacement pro would come to our rescue, the group behind us caught up. A floppy-haired 20-year-old suddenly took charge of the situation.

I’m certain that I’m making too much out of nothing here, but in that moment I was struck by the level of absolute confidence McIlroy felt in an uncertain circumstance. He hadn’t yet won on Tour but he seemed wholly comfortable to be there and to call the shots. His group played through. We waited for Jonathan Byrd.

That same week, McIlroy made the cut on the number. Then he shot 66-62 on the weekend to post 10 under and win the event — by six shots. It was his first Tour victory.

So when I read this week about Mickelson with the early lead, about McIlroy with the weekend charge to post 10 under, about Quail Hollow putting up a fight and about a gastrointestinal issue at the Walker Cup, things felt distinctly familiar.

(Shameless plug: You can read the rest of the story here.)

Rory McIlroy almost withdrew from the Wells Fargo Championship before it even started. Here’s how he described his sudden Wednesday neck injury:

“I have no idea. It’s no coincidence that I turned 32 the day before,” he said. “I”d had a really good practice session on the range. I hit a 3-iron, flushed it and I turned back to talk to Harry [Diamond] and as I turned, my left side of my neck just completely locked up and I couldn’t move it. It was really, really strange.”

Strange indeed. But maybe it was the perfect thing to lower his expectations. Good golf is a dark art, after all, and a low score justifies everything else. Even if that everything else includes a strange neck injury appearing out of nowhere.

His first win in 18 months and, according to him, a sign of things to come. We’re all optimistic after a good round, but if you believe McIlroy he’s working on some simple swing thoughts that held up under pressure.

Ariya Jutanugarn took home the Honda LPGA Thailand. It was an emotional win for three reasons: 1. Her winless drought had passed the 1000-day mark. 2. She was playing in her home country of Thailand. 3. In 2013, she had this same tournament firmly in hand before making triple-bogey 8 to lose by one. This time she played the same hole in half as many strokes to earn the victory. Cheers!

And the U.S. Walker Cup Team beat Great Britain & Ireland 14-12, a closer match than the punters would have led you to believe entering the week. While the aforementioned bowel-movement tracking took over some of the week’s attention, it’s terrific to watch high-pressure team competitions on challenging courses. Now maybe add the rest of Europe to the GB&I pool of players?

Abraham Ancer notched his fourth career runner-up on the PGA Tour — but he’s still searching for his maiden victory. When McIlroy was futzing around in the penalty area on 18, Ancer may have seen a glimmer of hope for just a moment. Instead he came up one shot shy.

Behind Ancer, Keith Mitchell hung tough in the final pairing, Viktor Hovland is dialing in, Gary Woodland appears mid-resurrection and Bryson DeChambeau snuck out one of the less conventional top-10s in recent memory.

Jutanugarn won the LPGA event for Thailand, but she was far from the only Thai player in contention. Atthaya Thitikul was second and Patty Tavatanakit finished T3. Three countrywomen on their home podium? Impressive!

A word of advice.

Is golf mental or physical? I asked Rory McIlroy, who has a new lease on the golf swing but never forgets his roots — he credited both his longtime coach Michael Bannon as well as his newest Team Rory member Pete Cowen in his post-round comments.

“It’s okay telling yourself mentally be strong and mentally play with freedom, but if you know you can’t make a swing to hit a fairway, you need to get the technical part right and then you can can dial in the mental,” he said.

In other words, if your swing is a mess, it doesn’t matter how good your mind is. Get it tightened up!

I have crossed over the mountain pass and arrived at Gamble Sands, No. 14 on our latest rankings of North American courses that are open to the public. It’s spectacular. I’m gazing out as a putting green behind my hotel room while I prep (mentally?) for a U.S. Open qualifier in the morning. I’ll report back with triumph (hopefully) or despair (more likely) next week — but Gamble’s greatness makes it an auto-win. More to come from here.

And something to aspire to.

Charles Barkley‘s name had literally become synonymous in the golf world with having a comically bad swing. But he didn’t quit. He doubled down. He saw a new coach. He took a new approach. And he worked at it until he legitimately changed his swing for the better.

This marks some small triumph of the human spirit; Barkley’s story is inspirational and we could all learn a thing or two from it. First, that being afraid of looking silly won’t get you anywhere. Second, if you don’t like your swing, fix it! Barkley did both. He deserves our admiration.

1. Jordan Spieth is back.

We’ve not seen him since the Masters. The last time we saw him in Texas, he was hoisting the hardware at the Valero Texas Open. Jordan Spieth is in the field at this week’s Byron Nelson. What kind of damage can he do?

2. Brooks Koepka is also back.

Is he healthy? We’ve not seen Jena Sims’ fiance since the Masters, and he didn’t look healthy there. This week will be a proper test pre-Kiawah.

3. Will Dustin Johnson show us something?

We’ll see you next week and see how it went!

In the meantime, here’s a fun YouTube video to check out next: