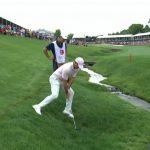 Through 17 holes on Sunday, Rory McIlroy had played a near-flawless round of golf. Thirteen pars. Four birdies. Two shots clear of the field.

But no lead is safe heading to Quail Hollow’s par-4 finisher. No. 18 played nearly a half-stroke over par for the week, making it the most difficult hole at the Wells Fargo Championship. And McIlroy didn’t make it any easier when he hooked 3-wood off the tee and his ball trickled into an awkward lie in the penalty area.

Then came the decision-making. McIlroy’s ball was still on grass, but there was a mound directly behind the ball. He could try chipping back to the fairway, but that would risk leaving the ball in trouble. He could play further up the hill to the left, but that would introduce a potentially awkward stance and an unpredictable approach.

That’s when his caddie Harry Diamond stepped in, urging McIlroy to consider all his options — including a drop.

“Harry was awesome out there today, especially that decision on the last,” McIlroy said. “I was ready to get in there and try to play that with a lob wedge and he was sort of like, ‘Let’s take a step back, let’s think about this. Where’s the best place you’re hitting your third from?’ So he sort of calmed me down and slowed me down a little bit and said, ‘Pal, let’s just think about this a little bit.'”

After some deliberation, McIlroy listened to Diamond’s encouragement and took a drop just outside the red line marking the penalty area, directly at his point of entry. From there he hit a clutch 8-iron onto the green, pin-high right. After the round, he called it the most important shot he hit all day. Finding the green helped justify the drop.

“Ultimately we made the right decision,” he said.

Sometimes a drop is much more than a drop. The decision was a reminder of so many things that defined McIlroy’s 19th win.

For one thing, the moment reminded us of the crowds, which were limited to 30 percent capacity but felt plenty loud down the stretch at Quail Hollow. They heightened the intensity of the moment, from the drop to the iron shot to the nervy two-putt that followed. McIlroy loved the scrutiny.

“It’s just awesome to play in front of these people again,” he told CBS after the round. “When we came back from the pandemic, I thought I’d enjoy the peace and quiet a little bit. I soon realized that to bring the best out of myself, I need this.”

The moment put McIlroy’s new swing under a microscope, too. McIlroy has been working tirelessly on his swing for months now, including the high-profile addition of Pete Cowen to his team a month ago. The process seemed to simplify McIlroy’s approach under pressure. He hit irons into 16 and 17 with surgical precision. And then, with the tournament on the line, he hit another money approach at the last.

“Needing to hit good shots down the stretch, I had a couple of very playable swing thoughts that I’ve had all week,” he said. “Obviously I wasn’t expecting to come and win first week straight out again. It’s satisfying to see the work is paying off, but it’s just the start.”

The drop was a reminder of McIlroy’s friendship with and trust in Diamond. The two have been friends since they were kids but have worked together since 2017; Diamond speaking up on the 72nd hole of a tournament is a sign that he’s comfortable voicing his opinion when he feels it’s needed.

“This is Harry and I’s sixth win together and it’s probably been our best one,” he said. “Bay Hill back in 2018 was great because I hadn’t won in a while, but this is even better just because Harry’s been there every step of the way. The tough parts that I’ve had to endure over the last few months, he’s been with me every step of the way and it’s nice to come through all that with him and to get into the winner’s circle again.”

Finally the drop was a reminder of the most basic Sunday lesson of all. McIlroy put it best.

Easier for some than others, though.