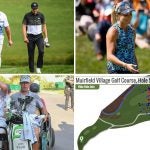 Yuka Saso won the U.S. Women's Open, but there was plenty of other intrigue behind-the-scenes of the golf world this weekend.

Welcome to the Monday Finish! This is where we’ll tally the scores for the week that was and tee you up for the week to come. This week that means Yuka Saso’s arrival, Jon Rahm’s strange WD, Jordan Spieth’s advice for Bryson DeChambeau and much more.

Of all the shots that Yuka Saso hit en route to victory on Sunday at Olympic, one impressed me the most.

It came on the 18th green on the second playoff hole. Saso hit the fairway and the green, setting up a relatively makeable birdie try to win the championship. But the putt was speedy, and whether because of adrenaline, aggression or just misjudgment she gunned it some nine feet past the hole.

Nobody in your group at home makes comebackers like this one. It’s tough to shake off the embarrassment of missing the first putt so badly; the classic move is to hit the first putt too hard and then leave the second one short of the hole before storming off to the next tee and damaging group morale. My heart sank, realizing this was the way a terrific U.S. Women’s Open was going to end.

But Yuka Saso, 19, is not like your group at home for a whole host of reasons. She proved it on that putt, too, gunning it at the center of the hole in front of a fired-up crowd and forcing the playoff to continue. One hole later, she poured in a birdie putt and walked off with the trophy.

Yuka Saso won the U.S. Women’s Open at the Olympic Club’s Lake Course. Her win marked the first major championship for a golfer from the Philippines. Her Sunday didn’t start well; she began par-double-double.

“I was actually a little upset. But my caddie talked to me and said, just keep on going; there’s many more holes to go. That’s what I did,” she said. We’re guessing it wasn’t quite that simple. But Saso birdied No. 16 and No. 17 down the stretch to jump into a share of the lead. She made par at 18 to earn a spot in the playoff. And she made birdie on the third playoff hole to seal a life-changing victory.

Patrick Cantlay won the Memorial Tournament, also in a playoff. He curled in a lengthy par putt on No. 18 at Muirfield Village to outlast playing partner Collin Morikawa and pick up his second Memorial title in three years. It was a strange Sunday at Muirfield Village; 54-hole leader Jon Rahm was suddenly purged from the leaderboard after a positive Covid test (more on that in a minute) but Cantlay still had to beat the rest of the field, hit all the shots and hold steady down the stretch.

“There’s a little something that I can’t quite put my finger on that makes it feel a little different, but I really hit a lot of clutch solid shots today and so I think I’ll remember that mostly,” he said. The first-place check should still clear just fine.

And Marcus Armitage won his first European Tour title at the Porsche European Open on the back of a final-round seven-under 65. Take a minute to watch his post-round interview:

I’m still processing what happened to Lexi Thompson, who seized control of the U.S. Women’s Open on the front nine Sunday only to watch it slip through her fingers during a back-nine five-over 41 that left her a shot outside the playoff. Thompson is just 26 years old but this, somehow, was her 15th USWO; I couldn’t help but wonder if the weight of expectations compounds year after year. Down the stretch, everything was suddenly a little off; she missed more fairways, shorted several crucial iron shots and got suddenly balky with the putter.

All week, Thompson was clearly focused on keeping her mood light and a smile on her face. She stuck with the smile even after leaving a downhill must-make par putt at 18 well short of the hole. She was classy in defeat, said all the right things and stressed that she has plenty more tournament golf ahead. But this one obviously has to sting.

“I started noticing the score and kept following the last three holes,” she said after her round. “I kept looking, and then also, since the last group was behind me, hearing the spectators, so I would find what kind of score it would be.”

She was up to the challenge until the third playoff hole, where Saso’s birdie putt ended her chances. But some second-place finishes are better than others, and this one was particularly well-fought.

At the Memorial, the tournament turned to a three-horse race. Collin Morikawa led through 70 holes before Patrick Cantlay canned a 25-footer at 17; he eventually made bogey on the first playoff hole to finish solo second. Still, it looks like Morikawa, who won last year’s Workday Championship, will be a sure bet at Muirfield Village for years to come. Scottie Scheffler finished solo third; he was in the mix until a bogey at No. 18.

At its best, the USGA is creative and gives us different types of looks when it sets up courses for its championships. That’s actually even more true when the U.S. Women’s Open comes to town; while the men’s side of the game demands stretching a course to the tips (or beyond) the best women in the world can play from closer to 6,500 yards. At an iconic host course like Olympic, that means Mike Davis and co. had endless options for variety.

Nowhere was that more clear than on Sunday at the back-to-back par-5 16th and 17th holes. No. 16 played to 558 yards and set up as a true three-shotter, yielding birdies and bogeys alike. But No. 17 was just 441 yards; even into the wind nearly everyone in the field could get home in two, provided their tee shots found the fairway.

The par-5s made for late drama. In the final group, Saso stuffed her approach to make birdie at No. 16 while Thompson two-putted for par. At No. 17, Thompson missed the fairway and the green, while Saso found the greenside bunker in two. Saso got up-and-down; Thompson didn’t. Two-shot swing. Tie game.

Heading into the week, there was plenty of attention being paid to the changes Jack Nicklaus had made at Muirfield Village following last year’s tournament. He added yardage and changed bunkers, slopes and sight lines. Players generally loved Muirfield before this year and spoke positively about the new look, but it didn’t seem to affect who played well; the three best golfers this week are the very same men who have won the last three PGA Tour events at Muirfield: Patrick Cantlay, Collin Morikawa and Jon Rahm.

Rory McIlroy had one interesting take on Nicklaus’ approach: He said it seemed like everyone is forced to aim to similar spots off tees.

“I think what’s happened here is everyone is just now playing from the same spot with their second shot, and it’s not an easy driving golf course by any means, but everyone is hitting to the same spot.”

That means less emphasis on McIlroy’s strength, which is driving the golf ball farther and better than anyone else in the field. But McIlroy isn’t 100 percent correct; there were a couple intriguing exceptions to his point. Some “alternate lines.”

First let’s check out the tee shot at No. 3. Typically the 401-yard par-4 plays as a hybrid or fairway wood, setting up a short iron over the water to a back-right Sunday pin. According to ShotLink, not a single player challenged the left side at last year’s event. But on Sunday, Justin Thomas went full send on driver, carrying the creek on the left and contending with some trees to try to track down a shorter approach and better angle to that tucked pin. Here’s his line compared to the entirety of the 2020 field:

A little different! Thomas was left with a short approach, settling just 61 yards from the hole at a perfect angle — and he took advantage, making birdie.

He wasn’t the only one to challenge the left side, either: Jordan Spieth got aggressive and was rewarded with a 10-footer for birdie. (He did not make it.) Late in the day, Branden Grace took it down the left, too, and made birdie — though his required a chip-in, so it’s hard to give too much credit to his aggressive strategy off the tee.

Finally let’s check out Bryson DeChambeau‘s approach to No. 5, a relatively short par-5 that takes a hard right turn after the tee shot. Or, if you’re DeChambeau, you can just take out the dogleg off the tee.

He played it relatively “safe” on Thursday, was forced to lay up and made par.

On Friday, he got more aggressive but the key to his eagle 3 was a spectacular 6-iron approach from just over 240 yards.

On the weekend, DeChambeau turned up the aggression off the tee. Saturday he took the far right line, tattooing one over the trees down the right side, and left himself with just wedge in.

And Sunday he took another alternate route, sending his tee shot into the rarely-explored left fairway, setting up another eagle.

Five under par for four days. Clearly he’s doing something right at No. 5. For context, below is where every tee shot landed at No. 5 in 2020, before a change to the fairway’s midsection. Nobody hit it even close to where DeChambeau did.

Jordan Spieth has some advice.

But I enjoyed hearing Jordan Spieth‘s perspective the most. Spieth is familiar with hecklers, he said, from recent years.

“I’ve had people tell me I suck to my face for a long time, so I don’t — you know, I mean, nothing, you just kind of zone everything out,” he told reporters. He also said he’d discussed it with DeChambeau on the course.

“He mentioned it to me at one point and I said, ‘All anyone wants is a reaction and if you give it to them, it’s going to get worse.’ So it didn’t seem to bother him.”

Spieth also noted that the jeers DeChambeau heard were far from the worst he’s experienced on Tour.

“I feel like, as far as pairings go, I would say if you’re paired with Patrick you hear some of the worst stuff — Reed, not Cantlay — from the crowd.”

Still, he (like Rory McIlroy) was clearly entertained by the entire Brooks-Bryson exchange.

“That whole thing was interesting last week, for sure,” he concluded.

Yes, I already posted it earlier in this article, but that was like 1,000 words ago and you probably didn’t even watch it. Here’s your second chance to see Armitage, emotional after his first Euro Tour win.

Thompson is teeing it up again this week at the LPGA Mediheal at Lake Merced. How will she respond to what happened over the weekend? Once more unto the breach, as they say.

We’ve got a course making its PGA Tour debut this week, which doesn’t happen particularly often. Congaree is a big-time Tom Fazio design that should pop on your TV screen and serve as a healthy appetizer for next week’s U.S. Open.